OnePlus is surely busy with the presumable OnePlus 5T release, later this month. However, this isn’t impeding them from keeping their current flagship updated.

The company has just released yet another update for the OxygenOS running atop the OnePlus 5T. The update 4.5.15 bring among other things the VoLTE for Airtel users inside India. The company also states that users need to check VoLTE coverage and availability first. 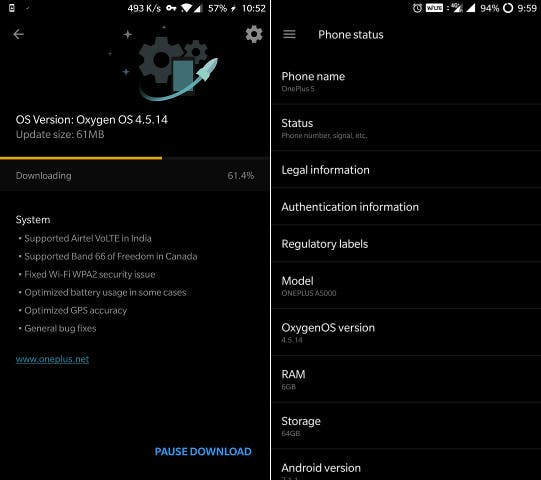 Another fix is focused in the dreadful KRAK WPA2 Wi-Fi protocol vulnerability. If you recall the KRAK, Key Reinstallation Attacks, would allow hackers to get advantage from WPA2’s weakness to gain access to devices, as well as intercepting passwords, e-mails, personal data and was also capable of installing malware content in websites. Now OnePlus ensures to have closed all doors of WPA2 and the OnePlus 5T users can browse in the web with their personal content totally safe.

Other fixes include battery optimizations over some idle drain that some users were suffering in different scenarios. The GPS accuracy also received a new revamp to improve smoothness and ensure faster satellite lock.

The update has only 61MB and is rolling out via OTA. Worths nothing to mention that the referred update still comes with Google’s September security patch, same as the last update released a month ago.