Any smartphone is ranked due to various features. It’s very important to make the phone very stylish. It should be great in terms of ergonomics as well. It should come with different trendy features. It should be priced affordably. But the most important feature of a smartphone we are going to buy is considered to be the power and the performance it provides. There are myriads of benchmark programs allowing us to test this or that feature of any smartphone. I guess, the most popular of them is AnTuTu. It is used to assess the overall performance of the device as well as separate parts. It assigns a numerical score as well as individual scores for each test it performs. So the overall score is created by adding the results of each individual score together. Those points don’t mean much on their own. But they get a sense when comparing with others. That’s why the benchmark’s website provides the top ten smartphones list based on their performance for a certain time period. Usually, it’s done monthly. As you guess, AnTuTu has released the regular list for October. There are three lists for iOS, Android, and overall one. So let’s take a look at each of them.

Here, you can see not only smartphones but tablet as well. And the list leads the second-gen iPad Pro with a 12.9-inch screen. It has been released back in June. The 12.9-inch iPad Pro is packed with an Apple A10X Fusion chip. So it’s not surprising to see a score of 234.220. It’s followed by the iPad Pro 10.5-inch released at the same time. This model scored 229.866 points. However, the company has also launched a few new models in September. And they entered the list as well. The iPhone 8 Plus is on the third, while its smaller variant, the regular iPhone 8 is the fourth. The rest belong to an older generation. 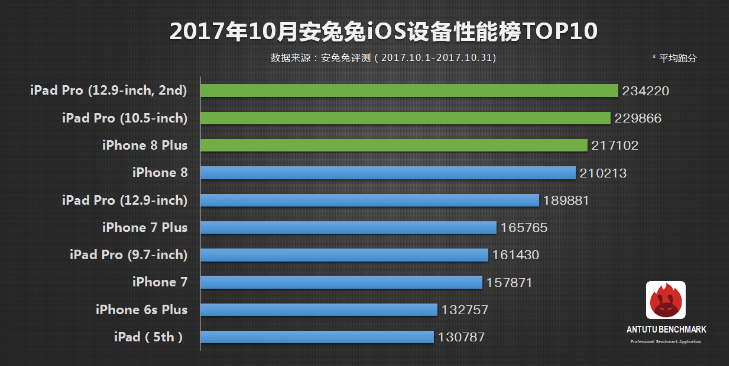 When it comes to Android, you won’t see any tablet included in the list. However, that’s not surprising. The first position is occupied by the OnePlus 5, which is going to get its full-screen variant in the nearest future in face of the OnePlus 5T. It scores 181.288 points. It’s followed by the newly announced Nubia Z17s with 179.454 points and its predecessor, the Nubia Z17 with 177.303 points. Surprisingly, the first phone coming with the first AI mobile chip, the Huawei Mate 10 is only the fourth. What’s more interesting, the HTC U11 that has been launched the way later than flagships of other companies has scored 176.171 points and settled on the fifth position. Not surprisingly, two Xiaomi phones in face of the Mi MIX 2 and Mi6 are on the sixth and eighth positions. The list is finished by the Sony Xperia XZ Premium. 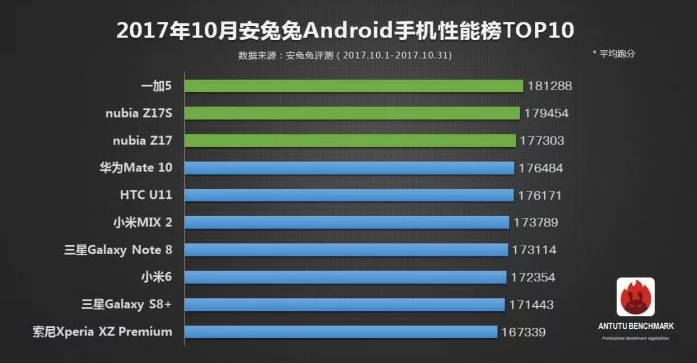 If looking at the overall list of best smartphones, the iPhone 8 Plus and iPhone 8 lead it. But there are still two Xiaomi phones. ZTE has two representatives. And the rest of brands are presented by one model only. 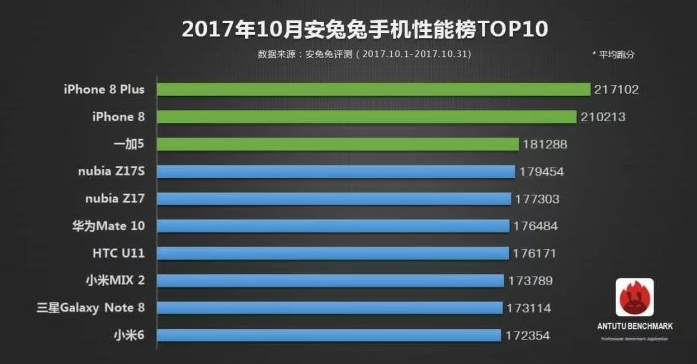