Gionee is gaining momentum. Its products are sold like hotcakes. Thanks to great appearance and smooth performance provided by impressive hardware the Gionee smartphones can be considered as the best newbies in the market. The company is going to announce up to 8 phones on November 26, and all of them will belong to the full-screen family. So not accidentally the event is titled as ‘Full Screen’. Some models that will be unleashed at the conference have been leaked during last months. Now it’s the turn of the Gionee M7 Plus, which is going to be the largest full-screen smartphone around the globe. 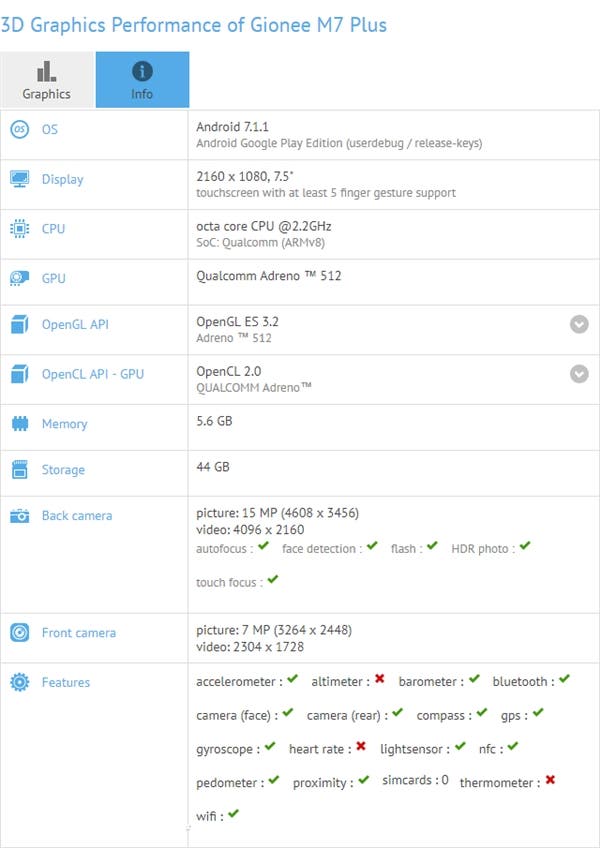 Today, the Gionee M7 Plus has been leaked in GFXBench documents showing a 7.5-inch full-screen with an 18:9 aspect ratio and resolution of 2160×1080 pixels. This simply means the full-screen technology enters another era. Now it hits the tablets market. Just imagine an iPad mini with a bezel-less screen. However, as for the Gionee M7 Plus, it’s also said to sport the Snapdragon 660 chip, which is found only on the super mid-range models such as the Xiaomi Mi Note 3, Vivo X20, and Oppo R11s. The SND660 is paired with a 6GB RAM and 64GB ROM.

At last, the Gionee M7 Plus also sports an 8MP front camera and a 16MP main camera. Unfortunately, there is no dual-camera module on the phone. But seems the manufacturer didn’t put it there to come in with a worthy smartphone. There are tons of dual-camera handsets available for a song, but most of them are not worth a nickel.

Next Razer Phone is now available in the US priced at 699.99$