The smartphone market is full of various brands offering myriads of devices at different price tags and with different features. But when there is a new trend in the niche, they all muster up some strength to come in with corresponding models. No one doubts the most trendy smartphone feature of 2017 is the full-screen. The latter has become so desired and demanded due to the Xiaomi Mi MIX launched last year. Now there are tons of such devices priced differently. You can even find a bezel-less screen smartphone carrying a brand name not heard for a long time. One of them is 360 (aka Qihoo 360). It’s a more or less popular Chinese smartphone maker known for its wallet-friendly devices sporting surprisingly good hardware. Today, the 360 CEO, Zhou Hongyi posted on his social media account informing the 360 N6 Pro will be unleashed on November 21. Seems nothing unexpected – a Chinese manufacturer is launching the next model. But the thing is that the N6 Pro will use a full-screen technology. 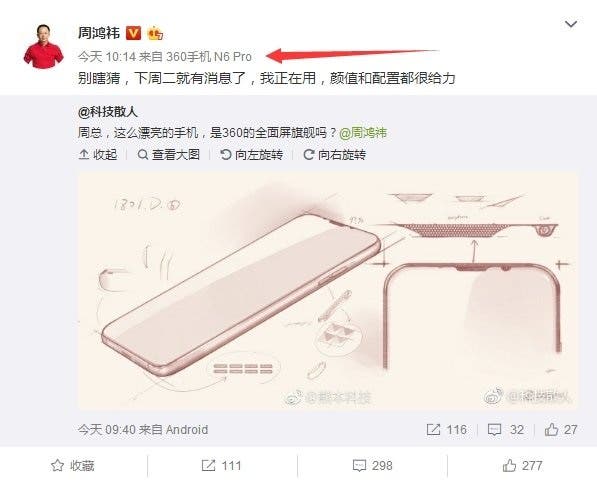 Unfortunately, there are no hints at hardware features and screen size, but one thing is clear – the 360 N6 Pro will be priced affordably. Earlier this year the company released the 360 N5 packing a whopping 6GB RAM. And what’s more interesting it was priced at only 1399 yuan ($210). The same can be said for its successor, which has been said to be the cheapest 8GB RAM handset at 1699 yuan ($256). So it’s quite possible the 360 N6 Pro will be priced around $250. Of course, there are many Chinese brands offering full-screen handsets for less, but the N6 Pro is rumored to sport more attractive features in terms of processor and camera.

Next Razer phone shipments in the UK get delayed