It’s almost two months since Android Oreo was made public and since then, a few mid-range Samsung devices have been getting the Android Nougat update. Now, Galaxy C7 in China has started receiving this update which is 1141 MB in size. This update comes with the build number C7000ZCU2BQJ6 and it is believed that Galaxy C7 Pro is under testing. 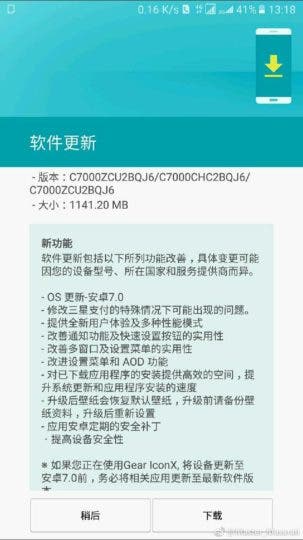 We know that the availability of the C Series is very limited thus there whether this update comes or not, it wouldn’t be such a big deal. It’s good that the much available and affordable J Series is also getting newer software compared to the C7.

As of now, Galaxy C7 in China is receiving the Nougat update and there is no indication if Android Oreo is a possibility for this smartphone.  Nevertheless, the Chinese smartphone market is tightening up with the likes of Xiaomi, Huawei, OPPO, and others releasing new top smartphones as well as their existing devices. Thus Samsung may want to consider updating its devices so as to win the heart of its customers.

Previous Razer phone shipments in the UK get delayed