Nokia phone fans in the U.S. aiming to grab HMD Global’s latest Nokia 2 finally get the opportunity to do so beginning today.

Preorders for the entry-level Nokia 2 phone have launched at Amazon, B&H, and Best Buy. 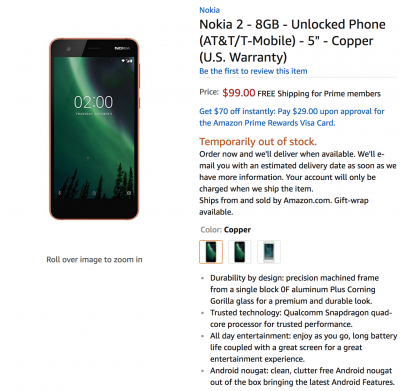 The device is listed on Amazon, B&H, and Best Buy with a coming soon label, which indicates that pre-order shipments will begin later on. The Nokia pre-order prices across the three sites is a cool $99 for an unlocked Nokia 2 unit which by the way will only work on GSM-based networks such as AT&T and T-Mobile (and the various MVNOs which use their networks). The phone is available in either White, copper and Black color options.

Earlier in the week, the Nokia 2 became available for sale in South Africa, after its initial debut in Russia.

Combining a premium aluminum frame with “sculpted” polycarbonate, the Nokia 2 comes fitted with a 5-inch HD display with Qualcomm’s new Snapdragon 212 SoC together with just 1GB of RAM and an 8GB of storage, which can further be expanded using microSD card up to 128GB.

The most interesting thing about the Nokia 2 is that it comes packed with a 4,100mAh battery which the maker claims can last a maximum of 2-days on a single charge. If Nokia 2 can actually live up to this claims, the device could very well be a perfect back up phone for those needing a second phone.

Next Vernee working on their first rugged phone, the Vernee Active