It is worth noting that, the model number of the  Sony phone that just surfaced gives us an impression that it could be a toned down variant of the unannounced Sony H4233 that reportedly surfaced on same GFXBench site back in September.

According to the GFXBench listing, the Sony H4133 is expected to come with a compact 5.2-inch display with 1920 x 1080 Pixels resolution, with an octa-core Qualcomm Snapdragon 630 chipset clocked at 2.2GHz. Graphics processing will be handled by the Adreno 508 GPU, aided by 3GB of RAM and 32GB of onboard storage.

On the flipside, the device house a single 21 MP camera with LED flash and 4K videos ability, while an  8-megapixel snapper lies above the display for video chats and selfies.

The device will boot Android 8.0 out of the box with full set of connectivity options including; Bluetooth 5.0, GPS, NFC, and WiFi. 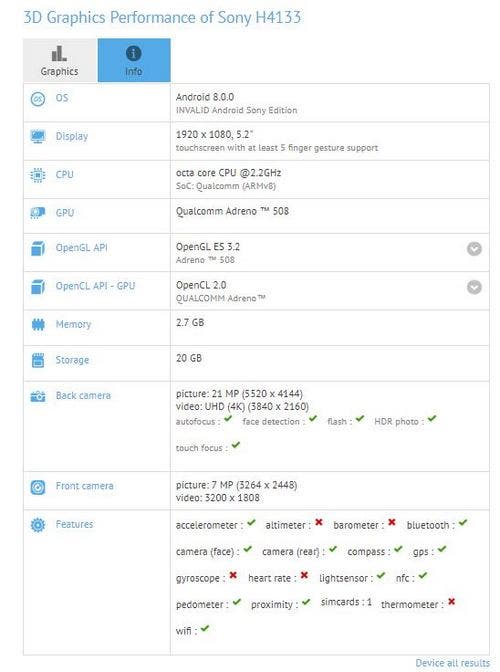 We are really not sure what line of Sony phone this could be, but there are speculations that it may be one of the Sony phones tipped to be announced at the 2018 Mobile World Congress (MWC).