The full-screen went viral in 2017. But this term refers to various designs. Actually, there are four types of full-screen handsets. First, the Xiaomi Mi MIX / MIX 2 canceled the forehead and left only the chin putting all sensors and the front camera there. Second, the Samsung Galaxy S8 comes with a narrowed forehead and chin and it also uses a curved screen design. Third, the iPhone X came with a ‘bangs’ screen, which means there are bangs on the upper part of the screen. The bang has a certain mission – it carries all the sensors, speaker, and front camera. Finally, there are many Chinese smartphones coming with various full-screen designs at 6 inches and 18:9 aspect ratio. Though one of the top brands in China (and worldwide) has already launched its full-screen flagship in face of the Oppo R11s / R11s Plus, it has applied for a new full-screen patent.

According to the leaked sketch, Oppo wants to patent a full-screen design that looks like the iPhone X ‘bangs’ screen. The patent application time is January 9, 2017, while the authorized announcement date is September 29, 2017. So we can make two assumptions – either the company has planned to launch a smartphone with a bangs screen and compete with the iPhone X or it is still working on such a handset. 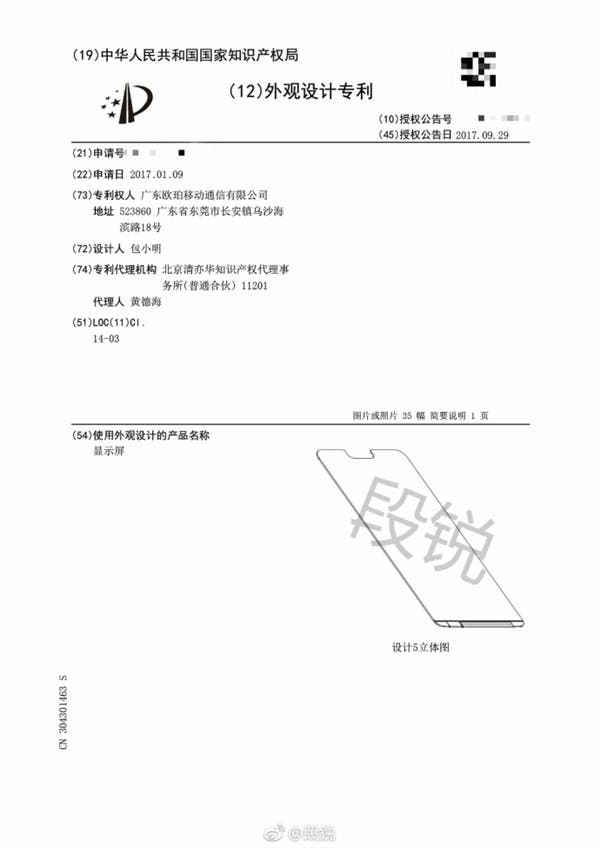 Of course, this patent application doesn’t mean Oppo will come in with such a screen for sure. But if Apple could benefit a lot due to the bangs screen of the iPhone X, why the next-gen Oppo flagship such as the Oppo R13 couldn’t sport it?

P.S. Seems the Xiaomi Mi MIX 2S will be packed with an identical screen as well.

Next Mystery Honor phone leaks, sports ultra-thin bezels unlike any other handset