Huawei has two launch dates coming up shortly. One is on 28th of November. The other is on December 5th in London. The former is related to its sub-brand Honor. It’s pretty much confirmed that the Honor V10 will be introduced on November 28. The second launch event in London has been teased for an ultra-thin bezel-less phone. If you go by the invite teaser that leaked earlier, it shows a frame with so slim bezels, no other phone has had it till date. However, Chinese teasers do have a way of overdoing it a bit sometimes. 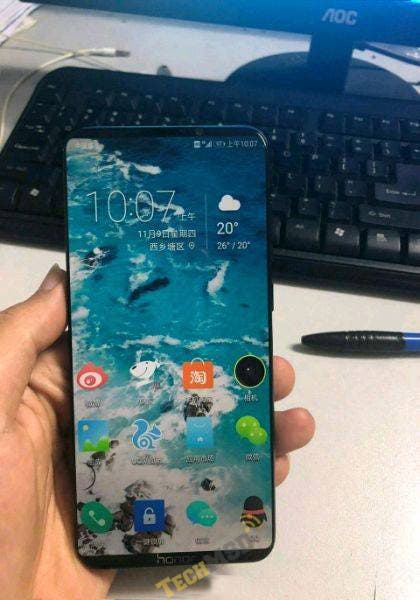 Today, the above image of an Honor-branded phone surfaced on the Web which has a similar frame. The image does look like it’s not photoshopped and it seems legit. Huawei does have its way of launching complete new phones and then forgetting them like it did with the Honor Magic in the past. This spy photo shows an Honor branding on the slim bezel at the bottom too. This seems a bit weird as companies usually place their logo where there is adequate space. The bottom bezel is not one of those places.

Apart from our doubts, this is the first instance of such an Honor phone ever. As such it is unique and if it holds any water, it’s awesome. The leak sadly only displays the front of the phone, so we don’t have any clue of what is on the rear.

Since this is our first sighting of this mystery Honor phone, there is almost no information related to its specs. Moreover, this probably isn’t the Honor V10, as a leak today has made it clear, still we wouldn’t jump to conclusions. The Honor V10 will be much in line with the Honor 7X in terms of design.
There is a possibility that this new design will be shown off on December 5th as a separate Honor phone. The company hasn’t officially said anything about what is coming on that date. On the other hand, the Honor V10 will be a toned down version of the Mate 10 for budget minded folks but will still pack a serious punch on the spec-sheet.