Chinese manufacturing company, Xiaomi, was founded only 7 years ago but its current impact on the global smartphone market is as though it has been around for decades. For Xiaomi, It was all about the pricing and timing happened to be perfect. This company entered India 3 years ago and at that time, 50% of the phones in the market was under Rs. 6000. The secret to Xiaomi’s success in India is not far-fetched. Today, Manu Jain Tweeted “The formula for success: Exciting products + Incredible team + Crazy-beyond-belief”. By “crazy-beyond-belief”, he obviously means the amazingly low prices of Xiaomi’s mid-range smartphones which have captured the heart of the Indian smartphone market. 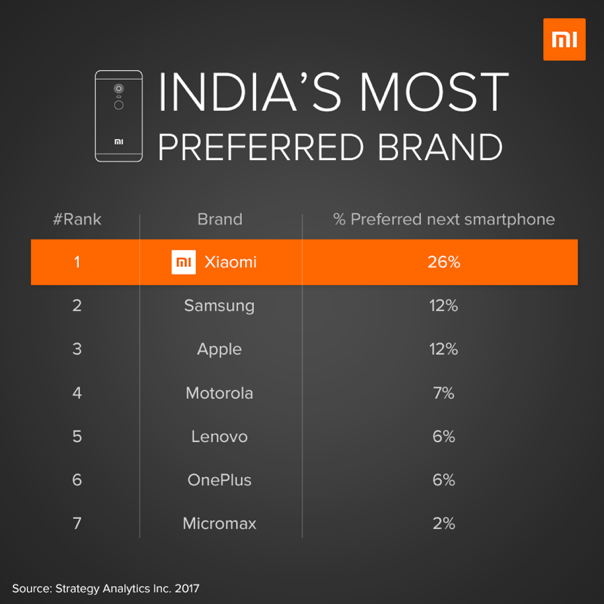 The company is now the second largest smartphone merchant in India and recently, it was ranked as the top smartphone brand in India in Q3 2017 by IDC and according to Strategic Analysis, Xiaomi is also the most preferred brand in India. Right now, the Chinese manufacturing giant is making some smart moves by supporting the government initiatives in releasing “made in India” smartphones. The company just opened its third manufacturing plant in India and the first facility only for power banks. In truth, Xiaomi never had a rough ride in India, it appears that the company’s initiatives were exactly what Indians were looking for.

Within two years, Xiaomi has set up of 100 Mi homes across India. India is a vast country and e-commerce is seldom available everywhere thus this move will benefit the company in terms of reaching out to the smaller remote regions in the country. This company is very young in India and right now, it has only smartphones, phone accessories, and other minor gadgets but with this growth, the company will eventually bring in other relevant products.