Two days ago we reported about the Oreo update for two Sony handsets, the Xperia XZ and XZs, at that occasion we mentioned that the next one receiving the newest Google cookie could be the Xperia X Performance, well and after all that seems to be the case. 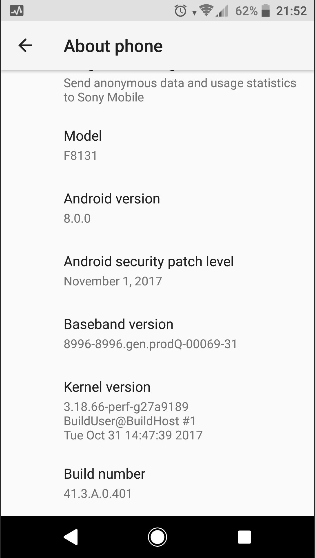 The Xperia X Performance is the fourth Sony smartphone to receive the newest Android version – The first one was Xperia XZ Premium, that was followed by both Xperia XZ and XZs. The update is rolling out through OTA and weighs around 1.2GB, so it may be a good idea checking storage to not run out of it during the update process. The firmware come labeled as update 41.3.A.0.401, the same serial found for the two XZ handsets.

The Sony’s Oreo update brings more than just the fresh stuff like Picture-in-Picture mode, Notification Channels, Autofill API and Smart Text Selection, found in any generic build of Android 8.0 Oreo. The company took the opportunity to add some of it personality over the update. For that reason users updating will find the Sony’s Reminders, to avoid missing any important event and Xperia Actions.

The update also brings Google’s November security patch, an update of great value since it fix the dreadful WPA KRAIK exploit. The update has just begun in some selected places, so we expect a few time to the update go live worldwide.

The update remarks once again Sony’s compromise in keeping their series of device running latest of Android OS, and security patched. If you are an enthusiast or follower of the brand, keep tuner for more details and future updates for their portfolio.

Previous dodocool Celebrates Cyber Monday - Up to 70% Off!