Definitively Sony isn’t the best company in terms of following trends or revolutionizing with design. To get an idea, their latest flagships like the XZ series have a design that still remember their old Xperia Z1 flagship. But apparently this is scheduled to change in a few months.

Apparently the manufacturer is finally keen to cut down their bezels, and follow up the hottest 2017’s trend, as a recent leak suggests. The company is working in an alleged flagship codenamed as H8541 and bringing flagship specifications. 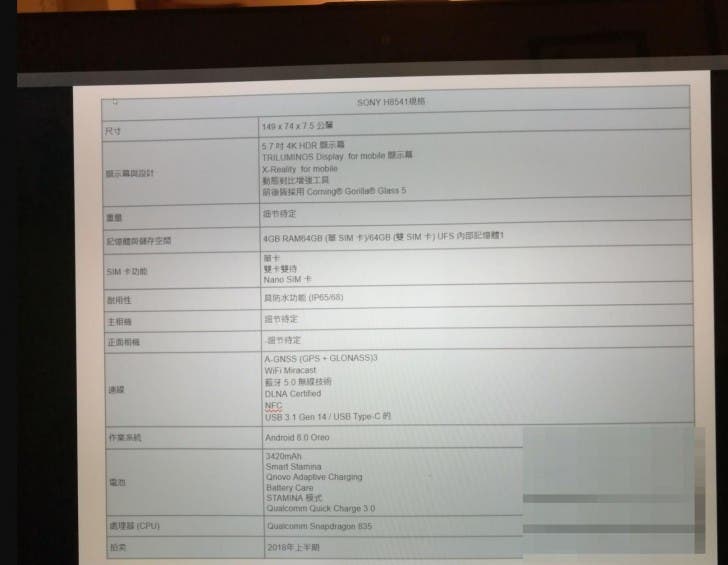 The information comes through a leaked spec sheet that claims to be authentic. Apparently the newest Sony smartphone will arrive with a 5.7-inch 4K HDR screen, retaining the same higher resolution of the Xperia XZ Premium.

Funnily the device is also listed with a Snapdragon 835 which is Qualcomm’s most powerful chipset up to date, but will soon be superseded with the arrival of Snapdragon 845 in the next year. You may ask why Sony is getting an older SoC considering that this is a 2018 phone? Well apparently the company is preparing a launch for the H8541 during MWC 2018 in February, a date that discards Snapdragon 845 since it will only be available for non-Samsung manufacturers a few months later.

Getting back to the point, the H8541 will sport 4GB RAM and 64GB of expandable storage, Bluetooth 5.0, NFC, water and dust certification and an USB Type-C port. Keeping all the lights on the smartphones counts with a 3,420mAh battery.

It’s good to finally see Sony moving themselves to keep being relevant in the fierce dispute of smartphones segment. However we are yet to see if this probable Xperia XZ Premium 2 will have the guts to compete with the likes of Galaxy S9 and LG G7, two devices that may arrive at the same time.

Previous OnePlus 5T is the fastest selling phone from the company

Next The Xiaomi Desh Ka actually is the Redmi 5a