Xiaomi is now set to launch a new smartphone later Dec 7. The company has already released some teaser images of its upcoming product launch on Weibo. Now, just days to the event, two Xiaomi devices have been spotted on China’s TENAA. The certification authority has also revealed some details and photos of the smartphones(Xiaomi redmi 5 and Redmi 5 plus), giving us a brief summary of what to expect from the smartphone.

As per the photos released by TENAA, the front is majorly occupied by the display coupled with the usual earpiece, and front camera. Below the display, you will find a fairly large bottom bezels.

On the flip side, there is a single rear camera module with LED flash and a fingerprint scanner. The Xiaomi Mi branding is also visible below.

TENAA certification page reveals that the Redmi 5 flaunts a 5.7-inch HD+ display with the trendy 18:9 aspect ratio, and will be powered by an unidentified 1.8 GHz processor, which may turn out to be the Snapdragon 450 chipset. The device will come in several RAM and storage variants. There will be a 2 GB RAM + 16 GB storage variant, 3 GB RAM + 32 GB storage and 4 GB RAM + 64 GB storage variants.

Android 7.1.2 Nougat OS, microSD card slot for memory expansion a 12-megapixel rear camera, 5-megapixel front camera and a 3,200mAh battery round off the Redmi 5 specs as outed by TENAA. 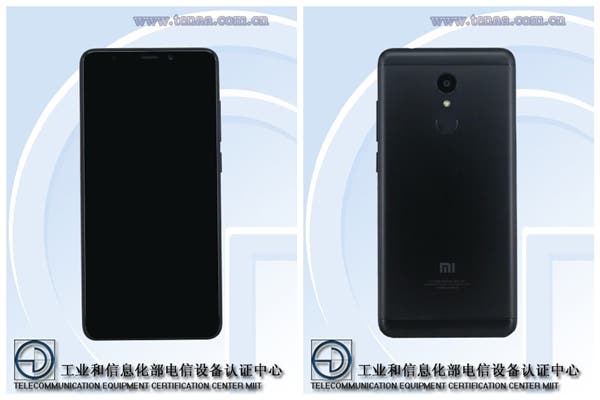 The Redmi 5 plus, on the other hand, will flaunt a fairly larger 5.99-inch FHD display. The plus variant should get a more capable processor with 2.0 GHz clock speed, which may likely be the Snapdragon 625 SoC. Every other spec remains the same, except that the plus size Redmi 5 will have a larger 4000mAh battery and will come only in 3 GB RAM + 32 GB storage and 4 GB RAM + 64 GB storage variants.

Previous Shipments for Huawei's Honor smartphones double in India during 2017