Many people think such a big number of smartphone makers won’t bring benefits to most of them. They are sure only two companies in the world have good sales. It’s not difficult to guess, those people are thinking about Apple and Samsung. It’s more proper to say this opinion is presented by people obsessed with iPhones and Galaxy-line smartphones. But what the actual number show is a quite different thing. Today Gartner published the smartphones sales numbers for Q3, 2017. And though Apple and Samsung still continue leading the list, the positions of other manufacturers have drastically changed. Get acquainted with the rest top smartphone vendors in the third quarter.

According to the source, the global smartphone sales reached 383 million units. It’s increased by 3% over the same period of 2016. Samsung, Apple, Huawei, Oppo, and Xiaomi are top five smartphone vendors in the world. Besides Apple, all four manufacturers have achieved double-digit growth. 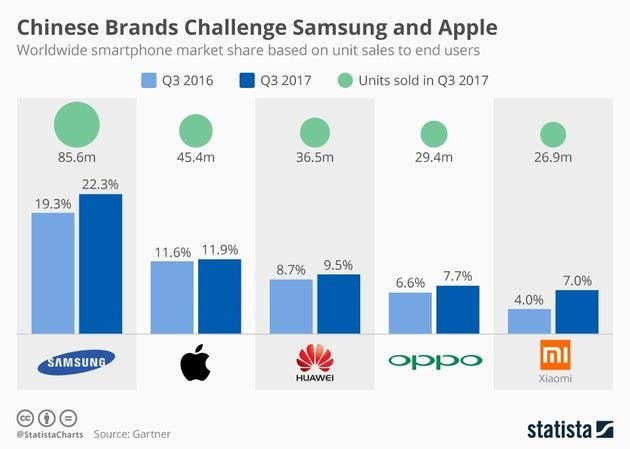 Say, Samsung’s sales in the Q3 reached 85.6 million units, which accounts for 22.3% market share. It has increased by 3% over the same period of last year. Apple sold a total of 45.4 million units in the third quarter. But its increase over the last year is only 0.3%. As for the rest manufacturers in the top 5, Huawei shipped 36.5 million units, Oppo did 29.4 million, and Xiaomi sold 26.9 million units.

Though all smartphone makers showcased great sales numbers, the most interesting of them is Xiaomi’s numbers. This is the only company in the history that could get back alive after a failure. That’s why its growth-over-the-last year indicator is identical to Samsung’s points.