The first Galaxy to receive the brand new security patch of December is the Galaxy A5 (2016). The update brings new security patch, optimizations, and bug fixes. However, it is not clear if the Wi-Fi verification issue has been sorted out. Earlier today, Samsung published the details of its December security update and now, the Galaxy A5 (2016) is receiving the update in the Netherlands.

The almost 200MB update for the Galaxy A5 (2016) comes as firmware version A510FXXU4CQL1 to the device. After the October security update, many users lamented irregularities with their Wi-Fi connection. The A5 (2016) could not connect to a Wi-Fi network due to a verification error. The update today brings a number of unnamed bug fixes and it is expected that this problem should be tackled in this update. Furthermore, the update also improves the stability of charging – although we are not entirely clear what is meant by this. The general performance is also optimized. 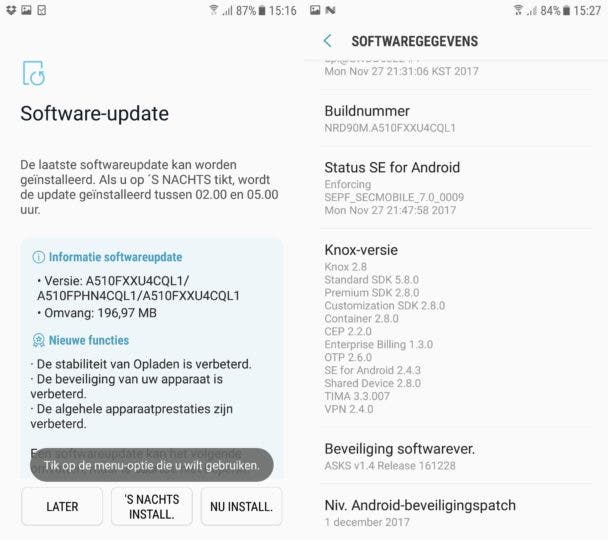 The December update is now available on the unbranded Galaxy A5 (2016). These are devices that were not purchased from a provider. If your device can download it, it will start automatically with it. Of course you can also check yourself if you go to  Software Update via  Settings . Then tap  Download updates manually, and your phone will immediately look for the update.

Have you already installed the update? Has the Wi-Fi problem been solved or not? Share your experiences below!