AZDOME dash cam manufacturer is one of the better regarded companies in China and abroad, due to their leading technology and high user experience in the dash camera world, compared to the competition. Many GizChina reader will recognize the DAB211 and the GS65H, two cameras launched by AZDOME this year. They are the most popular dash cams produced by the company, but that also brings a question, which one to get? 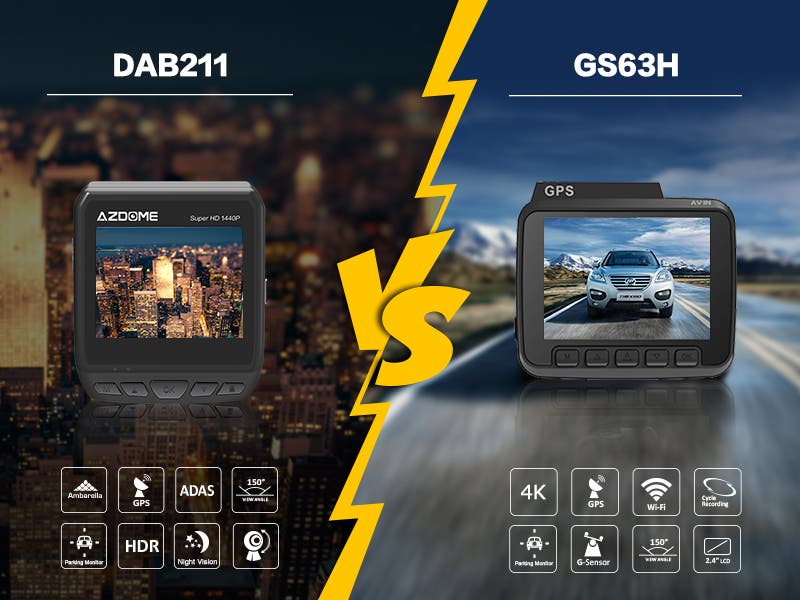 Let’s begin with checking out the main features of both dash cams. First, we have the AZDOME DAB211, with its high performance as it’s equipped with the best Ambarella A12 chip, an OV4689 image sensor and 64GB TF card support, which allows the dash cam to operate smoothly even at high speed without any hiccups or loss of video details. In addition to that, it can record 2560*1440p/30fps videos with a 150° ultra wide angle lens that helps it capture more details. Finally, the DAB211 has comes with some neat features such as G-sensor, parking monitor, GPS, ADAS, HDR, super night vision and so on, which can meet most users needs.

As far as the AZDOME GS63H goes, this is the world’s first 4k dash cam, making it the camera with the maximum resolution in the dash cam industry. Pictures shot by this cam are quite clear and detailed, and according to customer’s feedback it’s also the camera that shoots better videos compared to most competitors. The GS63H can record high resolution UHD video thanks to the Novatek 96660 chip and the OV4689 image sensor. Besides, the AZDOME GS63H also comes with GPS, WiFi, a 150° ultra wide angle lens, G-sensor, parking monitor and more.

If you still aren’t sure on what to get, let’s check out the comparison video below.

In conclusion, the final decision is really up to you. Both cameras are the best in their price segment so you can’t really go wrong with either. You’ll have to chose depending on your personal requirements and budget.

To learn more about the two AZDOME dash cams, visit AZDOME’s official website. Get customer support on their Facebook page.

Next Elephone Fighter Rugged Phone to come with MTK Helio X25 and 128GB of storage?