Samsung is definitely one of those companies that doesn’t really believe in numbers – when it comes to the battery capacity of their flagship smartphones (like the Galaxy S9 for example). We all want our flagship models to come with ample battery capacity in order to deal with the heavy everyday usage and perhaps live to… see the world for just one more day without using a charger.

The latest rumors regarding the next flagship of the Korean company however could suggest that something good is coming in terms of the battery capacity of the upcoming model. A new leak suggests that the Galaxy S9 will have higher battery capacity than the S8 model, and the info comes from a leakster who is reportedly the owner of a test unit with a battery size of 3200 mAh. 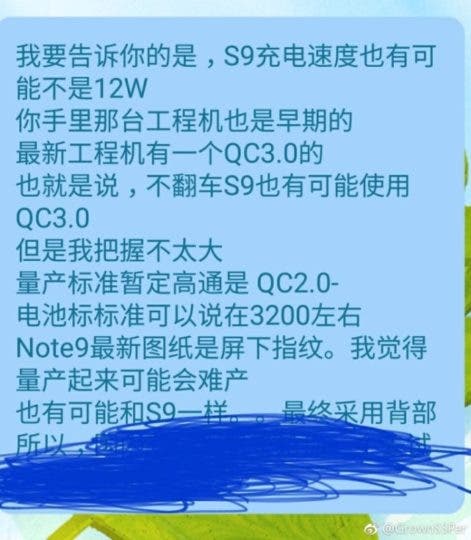 The image above is in Chinese, so we’re not that sure what it says but we can clearly spot the Quick Charge 3.0 support of the next-gen Galaxy S9. This isn’t something to brag about obviously as most Samsung phones (and others) already support this specific technology and one would expect a Snapdragon 845 flagship to come with improved charging technology.

If the Galaxy S9 however finally comes with a 3200 mAh battery, it would be safe to assume that the Galaxy S9+ model will pack an even larger battery, but as always nothing has been confirmed at this time.