The last quarter of 2017 seems to be a bit of a nightmare for the smartphone sector of South Korean manufacturing giant, Samsung. Reports show that the company lost its No. 1 position to Reliance Jio in feature phone sales in Q4 2017. Now, Samsung has suffered another blow as recent analysis suggests that Xiaomi toppled the Korean manufacturer to become the top smartphone vendor in India for Q4 2017. Many users might have seen this coming because back in November, news broke that Xiaomi shipped 9.2 million smartphone units to become the No. 1 brand in India for Q3 2017. Regarding shipments and market share for Q4 2017, Canalys reports says that Xiaomi shipped about 8.2 million units and racked up a market share of 27% while Samsung has 7.3 million smartphone shipments with a market share of 25%. These two brand claimed over 50% of the market share with the likes of Vivo, Oppo, and Lenovo following them. 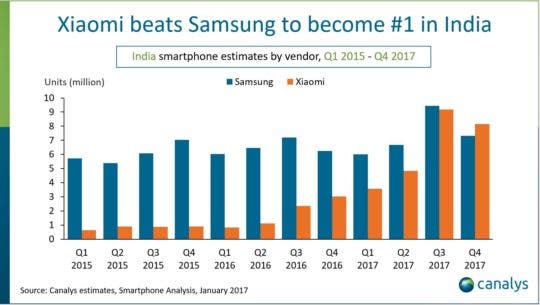 Market research firms customarily carry out their research from incomplete data thus the results are not usually accurate. They typically have conflicting results which creates more confusion than good. Recall that for Q3 2017, IDC stated that Xiaomi and Samsung had equal market share with 23.5% while Counterpoint Research showed that Xiaomi was far behind Samsung for the same quarter which is quite confusing. However, if the current reports are true, Samsung will only be losing the top spot to Xiaomi because its sales in India are not declining, but Xiaomi is growing at a blazing rate hence its performance.

The Indian market is genuinely expanding, and despite Xiaomi’s performance in India, Samsung still has a massive chunk of the market. Xiaomi has claimed the hearts of Indians with its mid-range and low-end devices, and Samsung has not done too well in this aspect. It now appears as though these two companies will lock horns for the Indian market. It will be fascinating to see what will happen later this year. Who do you think will have a better share of the Indian pie this year? Let us know in the comment section below.

Next EU Fines Qualcomm Over $1 billion For Buying Apple's Loyalty