Earlier in July 2017, Lenovo owned Motorola announced the limited edition Moto Z2 force in the US, and nearly eight months after its initial launch, the company looks set to bringing the device to the Indian market. The company has today issued out media invites for an event on Feb 15 in India.

While the invite only mentioned the TurboPower mod and the Z2 force, Motorola could likewise use the event to launch other products to the India market.

To recall, the device was launched in the US at a price tag of  $799  and that amounts to Rs. 51,460. While we expect the company to reveal price details of the Moo Z2 force in India, chances are the smartphone may cost less than. 51,460. 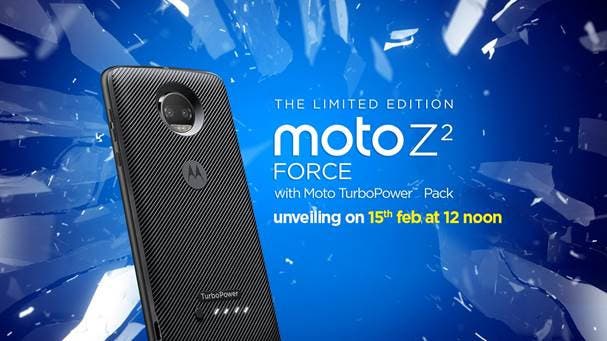 To refresh your memory, the Moto Z2 Force features a 5.5-inch Quad HD AMOLED shatterproof display with a Qualcomm  Snapdragon 835 coupled with 4/6GB of RAM and 64/128GB of expandable internal memory under its hood. In the camera department, Moto Z2 Force comes with a rear dual camera setup with a 12MP main camera supported by another 5MP secondary shooter. The lights of this smartphone are kept on by a non-removable 2730 mAh battery. More details here.