Among the rumors that insist on a possible launch during this Mobile World Congress 2018, earlier today we had another leak regarding the Xiaomi Mi 7, that will surely put a smile on your face – if you’re a Xiaomi fan that is. 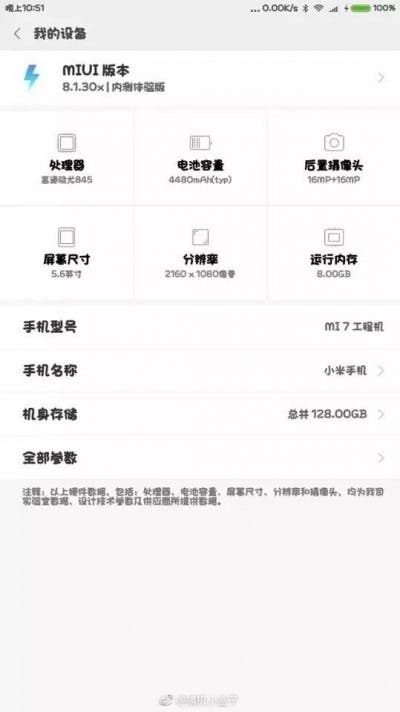 According to a recent leaked screenshot that presumably belongs to the most awaited model, the device is going to be equipped with 8GB of RAM and a massive 4480 mAh battery (!) – which is quite a bump up when compared to the 4/6GB RAM and the 3350 mAh power cell of its Mi6s predecessor.

The screenshot also reveals that the device will be equipped with Qualcomm’s Snapdragon chipset, along with 128GB of internal storage, a dual camera setup on its back (16MP+16MP), a 5,6 inch display with 18:9 ratio and FullHD+ resolution. If you have a better look at the screenshot, then you might spot that the device runs on MIUI 8.1.30x, which means the build is from January 30, 2018 – a quite recent build!

We urge you to stay calm regarding this leak, as recent rumors also suggest that Xiaomi might launch the Mi Mix 2S first and the Mi 7 in the near future. Who knows?