After a year of demise, with its flagship chipset – Helio X30 – being considered a flop, MediaTek decided to put all its effort on the mid-range SoCs. We already know some details of the upcoming Helio P40 and Helio P70, but apparently, the Taiwanese manufacturer also has another chipset to come, placed between the two, the Helio P60, and according to GeekBench, its launch is imminent.

The Helio P60 was caught in what could be a simply Benchmark session through GeekBench. The chipset appeared running in a device codenamed as P60 MWC Demo, pointing to an obvious MWC 2018 release. Just like Qualcomm usually does, the handset should be just a reference design, with 4GB of RAM and Android 8.1 to show what the newest chipset is capable of. 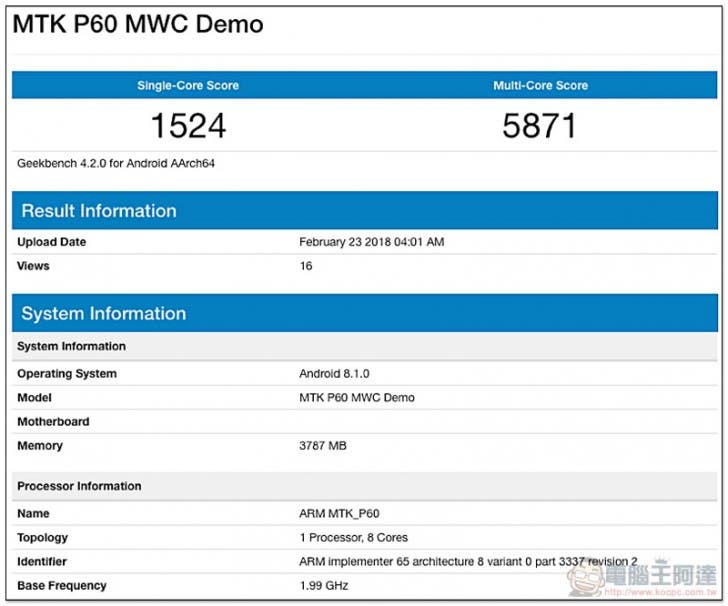 While there is no information regarding the CPU, the Single Score is too high for a simple Cortex-A53, it’s closer to the results usually got by Cortex-A73 setups. The multi-score in counterpart brings a standard from an Octa-Core processor. The Setup used should be the usual big.LITTLE design adopted by MediaTek with the Helio X chipsets, judging by the scores it could offer enough competition to the loved Kyro Snapdragon 660.

Curiously, the Helio P60 appeared all of sudden in the GeekBench while the highly-anticipated Helio P70 hasn’t been revealed by any benchmark. If this newest chipset is going to be revealed during MWC 2018, then you should be tuned for more info about it in the coming days.

Previous Alleged Huawei Nova 3 made an apparition through TENAA