A lot of people had hopes that Xiaomi would launch the Mi Mix 2s at MWC 2018. However, a new post by the Xiaomi CEO himself on Weibo has revealed the launch date of the Mi Mix 2s. Well, that’s another phone less from the MWC exhibition. 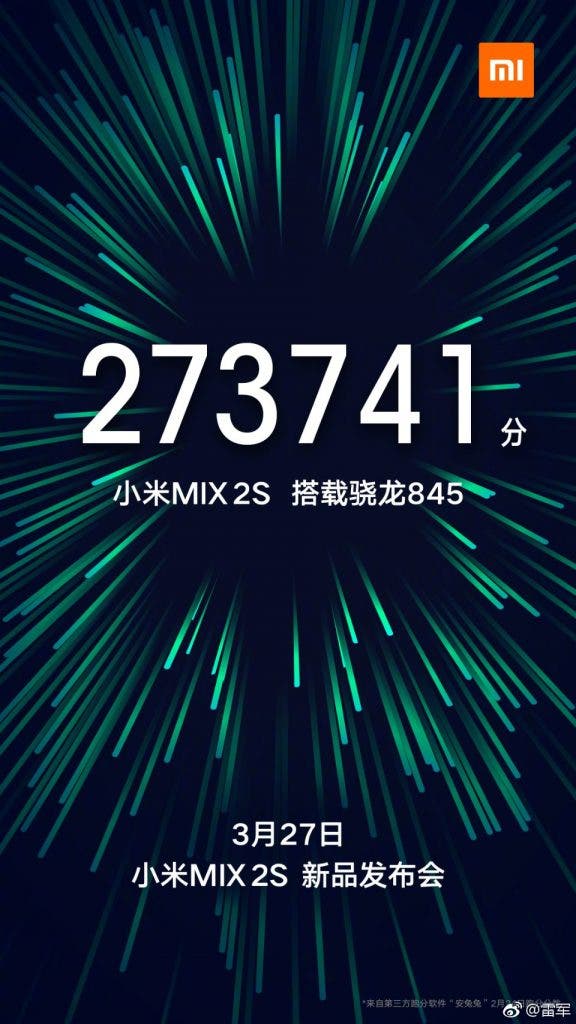 Lei Jun yesterday posted a teaser that says that the Mi Mix 2s will launch on March 27th. Moreover, it also shows the AnTuTu benchmark scores of the device which appeared as ‘Polaris’ on the platform. Of course, the benchmark was for the Snapdragon 845-bearing device and it means that the Mi Mix 2s will also be ticking on the same SoC. If there were any doubts, it has been confirmed on the official teaser as well. The staggering AnTuTu score of 2,73,741 points left behind other flagships like the Galaxy S9 which is impressive, to say the least. So, now there you have it. There’s still a month’s wait before we can finally see the Mi Mix 2s in the flesh.

The existence of the Mi Mix 2s was largely flamed by rumours until some firmware files received XDA finally confirmed its existence. This official teaser seals the deal. However, speculation regarding the design of the device will likely remain a hot debate until the launch takes place. Expect more details to trickle in as we enter March. For details on rumoured specs, take a look at this article here.