Most of the mobile world news these days revolves only around the MWC 2018 in Barcelona and all the big names presenting their new flagship models, like the steeply priced Samsung Galaxy S9 Plus for example. Some of the smaller yet interesting pieces not at MWC are flying under the radar, like the UMIDIGI Z2.

Rumor mill about this model has been over-active in the last month, and there was even a leaked image that showed an iPhone X-like notch and glass back. Yesterday a new UMIDIGI Z2 image got leaked online, showing no fingerprint on the back of the phone (the previous one has), pushing us to an estimation that Z2 will adopt in-display fingerprint or will have a slightly different Pro version. 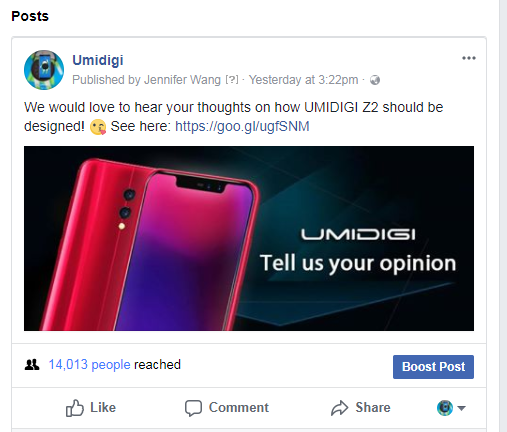 UMIDIGI Z2 (estimated price $300) should come with a  rumored 6.2 ” FHD + top notch screen with 2246 × 1080 resolution and the world’s fastest wireless charge(15W). New leak also hints at UMIDIGI Z2 launching globally at the beginning of April so not that far up ahead.