The BlackBerry KEYone was one of the last year surprises from BlackBerry. The handset carried a build that took a glimpse of the company’s past, featuring a QUERTY keyboard and packing a good battery, the handset was well received by the community.

Despite the fact that the KEYone managed to sell only 900,000 units around the world, BlackBerry considered it a success. Well, we should agree with the company, since achieving a nearly 1 million amount of the shipments is something remarkable for a company that was on the verge of demise. The KEYone was available in 50 countries and through 110 carriers.

Apparently, the company is aiming to introduce a new successor to its most successful device since the Android-switch. The first rumors of KEYone 2 appeared in the last year when some documentation suggesting that the handset would pack Snapdragon 845 appeared online, but today those rumors will breathe a new fresh air. 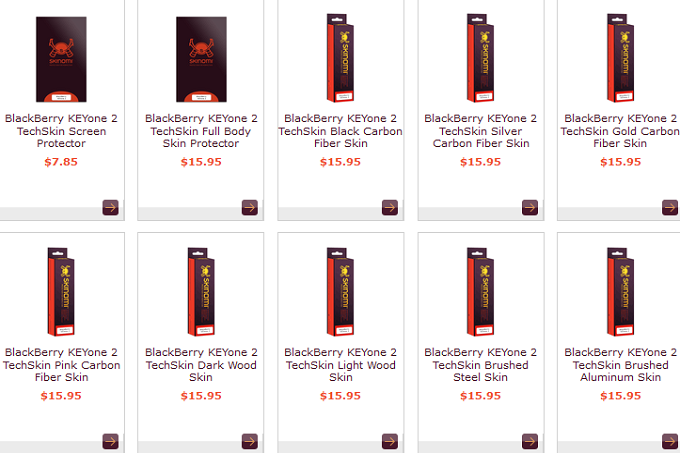 Through two websites, one from Amazon and another from Skinomi, known skin’s retailer, a set of screen protectors and skins appeared online and with pricing. Both accessories belong to no other device than the upcoming BlackBerry KEYone Two. We have a carbon fiber skin, Light Wood skin, Brushed Steel skin and more.

Sadly, no additional info for the KEYone 2 was revealed through these leaks. Would be awesome if the screen protectors described the size of the new panel, considering that the KEYone packs a 4.5-inch display we are curious to see if BlackBerry would employ a big panel on the KEYone 2. For now, all the speculations remains the same, the KEYone two should bring a better processor, a bigger battery and more features for the QUERTY keyboard.