Xiaomi does first-rate in the TV market as well. In 2017, it announced the Xiaomi MI TV 4 with a 4.9mm width. Thus it was way thinner than the slimmest smartphone. But many customers couldn’t afford themselves to get their hands on it. That’s why the manufacturer decided to bring its innovations to larger masses via cheaper products. The best proof of this statement is the Xiaomi Mi TV 4A. It is not as slim as the original Mi TV 4, but it comes with almost the same features. A few days back, the company unleashed the 40-inch variant of the 4A model. Today, it’s gone on sale at a price tag of 1599 yuan ($252). Thus it is discounted by 100 yuan just at its launch.

Externally, the Xiaomi Mi TV 4A 40-inch doesn’t differ from its siblings. The only difference refers to the dimensions (906x567x241mm) as well as the weight (6.01kg with the base). However, the rest of features remain the same.

This simply means the Xiaomi Mi TV 4A 40-inch provides a 1920 × 1080 pixels resolution. It is also packed with a Cortex A53 quad-core processor clocked at 1.5GHz and paired with a Mali-450 MP3 GPU, 1GB of RAM, and 8GB of ROM. There are stereo speakers supporting Dolby.

This TV is also great when it comes to the connectivity. Besides the WiFi support at 802.11 b / g / n standard, it comes with a number of useful interfaces including two HDMI ports, AV, an analog signal DTMB, two USB ports, an Ethernet port and an S / PDIF X audio output interface. So you can plug any peripheral to use it as you wish.

However, the selling point of the Xiaomi Mi TV 4A models is the support for the voice commands. It’s dubbed as the Patchwall. This AI system allows users not only to manipulate the TV but also ‘talk’ to it. Search for anything and it will reply you. 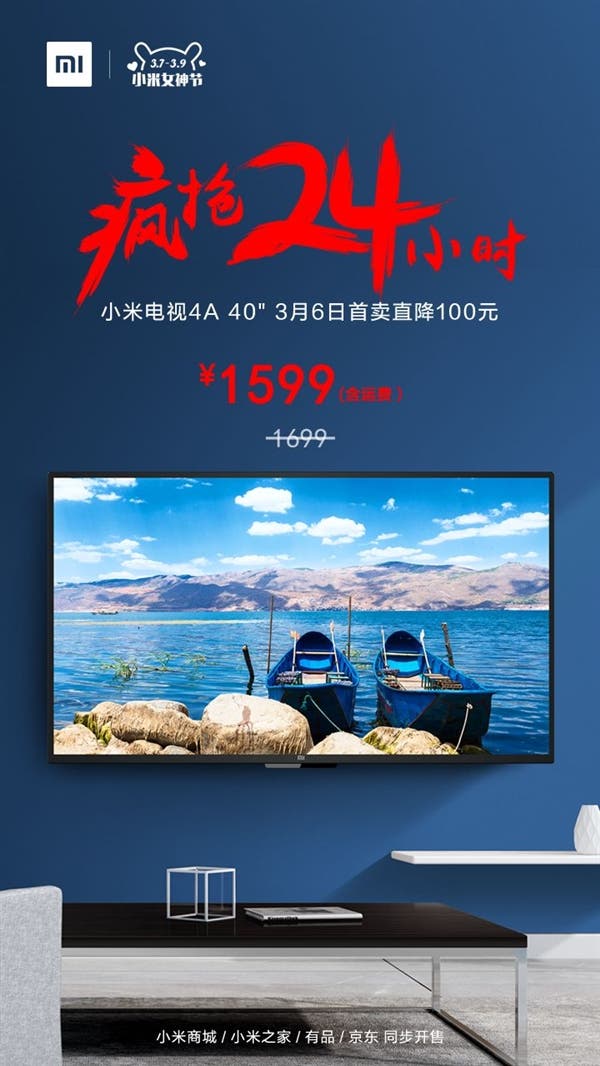