Recently, Xiaomi’s eco-chain company, Yunmi, announced the high-profile launch of its premier smart dishwasher at AWE Expo. However, subsequent reports claim that the product was immediately expunged from its shelves after the company was accused of patents infringement. Xiaomi Yunmi has responded to the claim stating that it is absolutely false. Xiaomi Yunmi smart dishwasher uses an Italian Weike washing pump which provides 15000pa ultra-high pressure of decontaminated clean water which will cause no harm to the utensils. It applies a 3D spray technology with 360° curvature without dead angle and 70 °C high-temperature washing. This large capacity dishwasher supports fast washing mode and 8 sets of cutlery or 64 pieces of tableware can be washed once. Its got support for APP control and costs 1999 Yuan ($315).

The reports claimed that the Yunmi dishwasher infringed numerous patents in at least five different aspects of the device. The design, washing basket, door look, and door structure were mentioned to have infringed pre-existing patents.

However, Yunmi has said that its dishwasher was exhibited until the end of the exhibition and did not leave the shelves at any time. At the same time, online pre-sales had already commenced. Yunmi also emphasized that it fully respects and values the protection of intellectual property rights and has confirmed on-the-spot by the Shanghai Pudong New Area Intellectual Property Association staff that there has been no infringement.

1. Reports that Yunmi Dishwasher was expunged mid-way through an exhibition due to patent infringement are inaccurate. Yunmi dishwasher was exhibited normally during the exhibition and there was no report of the situation. Yunmi exhibited dishwashers and whole-house internet appliances at booth 2F31 in hall E2 of AWE. Yunmi Internet Dishwasher has started online pre-sale, starting at 1999 yuan.

2. Yunmi fully respected and attached importance to the protection of intellectual property rights. It was confirmed by the staff of the Shanghai Pudong New Area Intellectual Property Association that there was no infringement.

3. Yunmi is a company that focuses on product innovation. We hope that through product upgrades, we will work together with everyone to promote the development of the industry. For the media and individuals who distorted the facts, Yunmi reserves the right to pursue legal responsibilities. 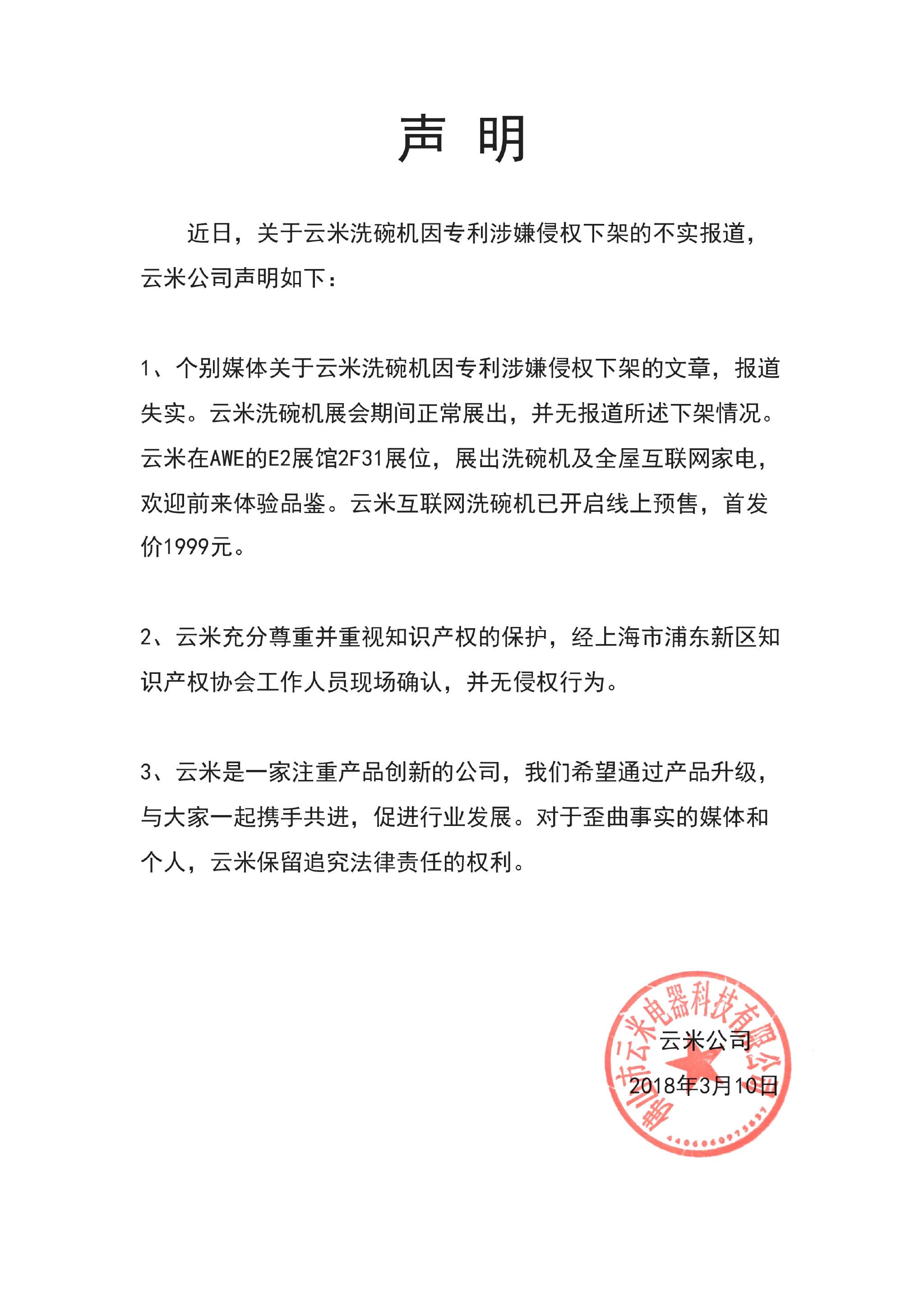 Yunmi was established in May 2014. Xiaomi invested in the company and positioned it as an Internet appliance company focusing on the R&D and manufacturing of small household appliances. It is committed to providing safe and intelligent solutions for small home appliances.

Previous Vivo Xplay7 may launch with this unique feature