Lenovo’s Redmi Note 5 Pro competitor, the S5 is poised to be introduced on March 20 in China. Following the announcement of the launch date, an official teaser sheds light on the stand out features of the handset. 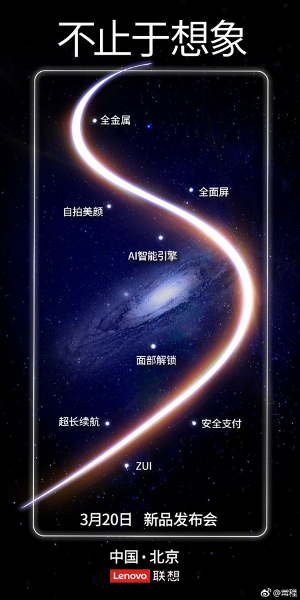 The teaser shared by President Liu Jun on Weibo reveals not one or two but several features at once. One of them is a metal unibody design with a thin bezel display, unsurprisingly. Moreover, the Lenovo S5 will boast of AI features, description of which is not yet available. Moreover, following trends, it will be packed with facial recognition as well. Lenovo is set to bring back ZUI from the dead with the Lenovo S5 as teased in the image itself.

Earlier, a Lenovo official boasted of the processing power of the upcoming phone saying it will be better than the Redmi Note 5 Pro. At present, there are no details available on the specs of the handset. But if the company’s claims are true, it will be one hell of a phone.
It is believed that the Lenovo K520, which has passed TENAA, will become the Lenovo S5. This is being said especially looking at the design which matches with a teaser of the Lenovo S5.