A new Galaxy J series handset is the subject of a new leak just exposed by Slashleaks. According to the info, the J series handset was found on Geekbench revealing key hardware info of the phone. The handset has model number J805G and is believed to be the Galaxy J8 Plus. 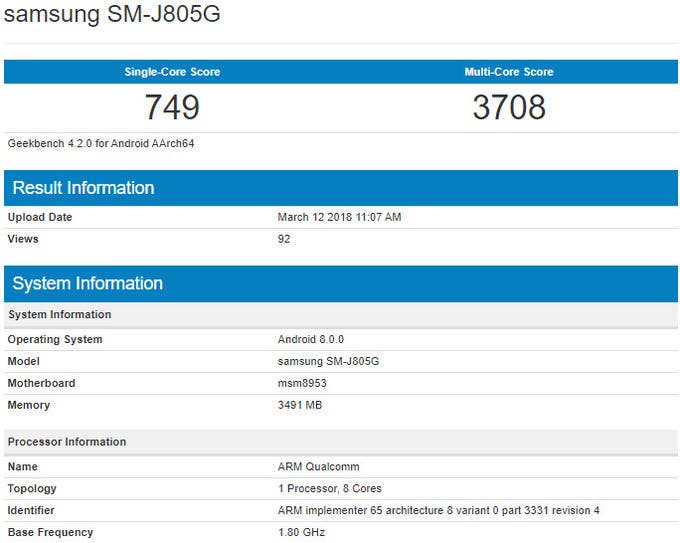 If the benchmarks are correct than the upcoming device should be equipped with a Snapdragon 625, which is a tried and tested CPU. The 1.8GHz octa-core chipset will be backed by 4GB of RAM in case of this handset. The benchmark reveals Android Oreo runs on the phone which is always a good thing. Especially considering Samsung’s record of shipping mid-range phones with older versions of Android.

According to floating info, another variant of the same Galaxy J8 Plus exists. It was reported last year with model number SM-J800FN. This particular variant will not only possess a different processor but also low RAM. The handset will feature an Exynos 7870 chip with 3GB of RAM.

The Galaxy J series is a popular mid-range option for Samsung customers in India. Recently, the company announced that it will be focusing on the Indian market with exclusive devices for the region. The Galaxy J8 Plus could be part of that equation. However, nothing has yet been confirmed.

As of now, only above-mentioned details of the handset were found lying around, we’re sure to see more schematics creep up on rumour radar soon.