The Vivo X21 is slated to launch within days on March 19 in China. Official teasers of the handset have hinted about an in-display fingerprint scanner, but that’s about it for specs. However, the handset has just passed Geekbench to reveal some juicy tidbits about the processor tucked inside the phone. 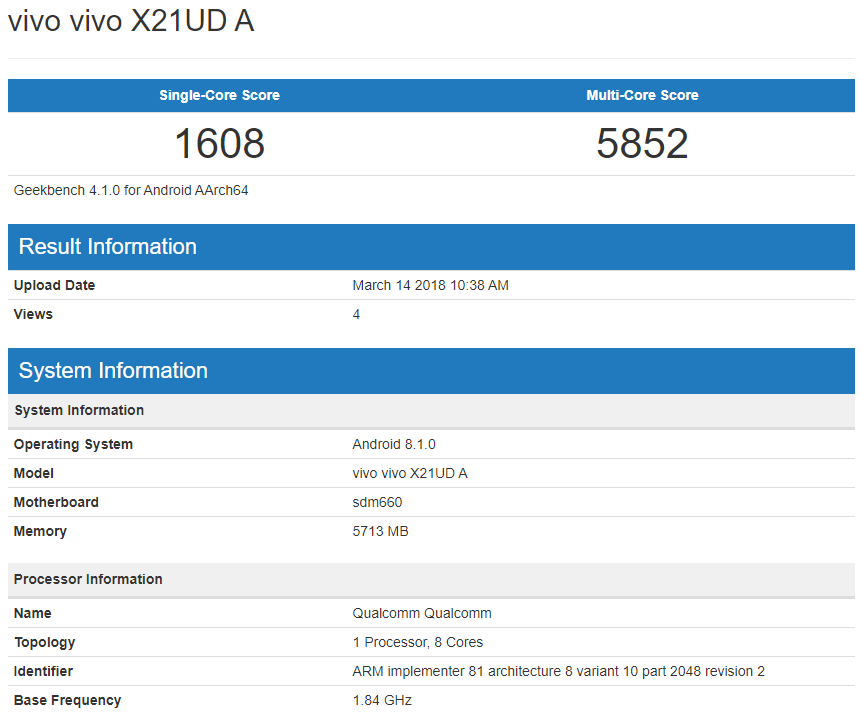 The Vivo X21 although won’t be as high end as the Vivo X20, it will be a respectable offering loaded with a potent Snapdragon 660 CPU. The test sheet shows other promising stuff is onboard the handset like 6GB of RAM and Android 8.1 Oreo. Of course, you can’t imagine Vivo offering stock Android, it has to be topped with FunTouch OS 4.0. That’s pretty much it as far as Geekbench can say.

The scores are also promising as is expected from the Snapdragon 660 chip. The Vivo X21 was earlier rumoured to feature an unreleased Snapdragon 670, however, the chip is yet to be official. Hence, we’ll have to settle for the year-old CPU. The Vivo X21 will be Vivo’s second device that will boast of an in-display fingerprint scanner. And we’re looking forward to seeing even more OEMs taking the tech on board in the near future.

As for the design of the handset, it is already a foregone conclusion that it will resemble the Vivo V9 that is launching later on in India on March 23.