Amongst the constant array of reports surrounding the Vivo X21 and the V9, an unknown smartphone, going by the name, Vivo Y85 has been reported to have leaked on what seems to be a retail website. Judging from the listing, it seems to be no more than a mid-ranger. Let’s take a look at what we know. 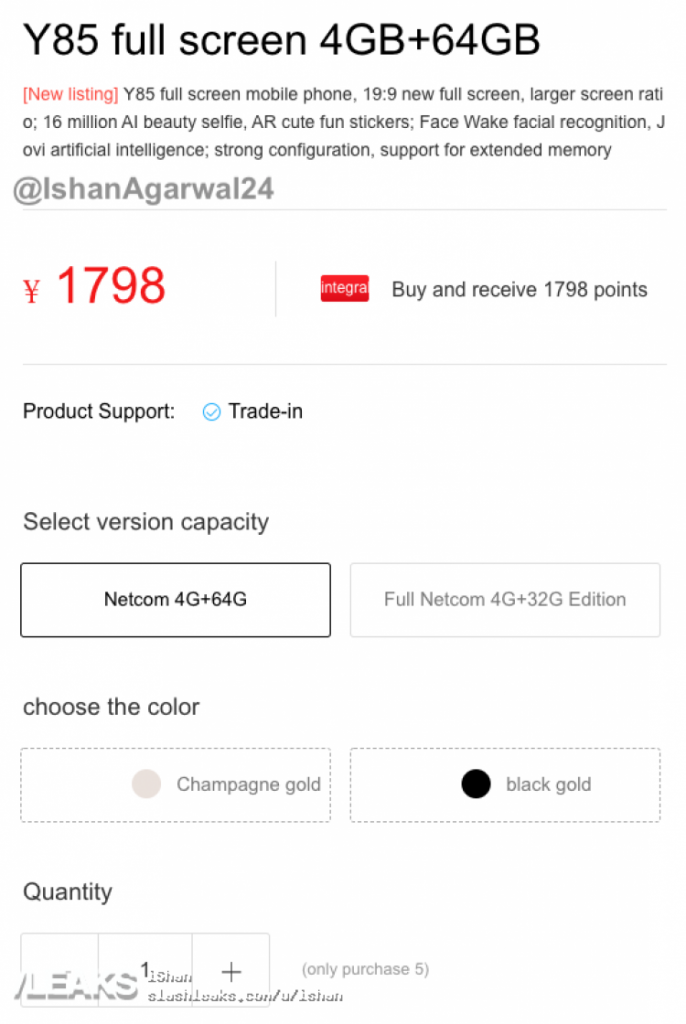 According to the description, the Y85 will be a full-screen phone with the display having a 19:9 aspect ratio, which is quite impressive. It will have a 16MP front camera with AI support for better selfies, Face Unlock feature, dedicated AI called “Jovi” and expandable memory. Dimensionally, the phone will measure 154.81 x 75.03 x 7.89mm. The listing says that it will be available in two color variants, Champagne Gold and Black Gold.

Diving into the specs, the display will be 6.26-inches in size which essentially puts it in the phablet segment. Under the hood will be the Qualcomm Snapdragon 450 chipset. The Vivo Y85 will be available in two memory variants, 4GB+64GB and 3GB+32GB, both of which will be expandable via microSD card. IN the camera department, it seems that the rear will be a dual camera setup of a 13MP and 2MP snappers and the front a 16MP snapper. It will be powered by a 3260mAh battery and will run Android Oreo 8.0 out of the box. The 4GB variant is expected to be priced at ¥1798. It will have the usual connectivity options, WiFi, Bluetooth 5.0, micro USB, GPS and OTG support.

There is no word from Vivo, but it seems like this phone will soon see the light of the day. Probably with the X21? Cannot say anything for sure.

Next Vivo Y71 Passes By TENAA