Huawei,  in about few days from today, will be unveiling the P series of Huawei phones which should comprise of the Huawei P20 Pro, P20, and the P20 Lite. And while we reported earlier today that the Huawei P20 Pro will come with the triple real camera, the same device has now been spotted on the Geekbench database with a few basic specs.

A check through Geekbench database reveals the presence of an Huawei device with the model number Huawei CLT-L29 where CLT is short for Charlotte – the codename for the upcoming Huawei P20 pro. As per the benchmark listing, the Huawei P20 Pro will run Android 8.0 Oreo out of the box with 6GB RAM and unnamed 1.84GHz octa-core processor which is believed to be the company’s Kirin 970. The Kirin 970 chipset was used on the Huawei Mate 10  pro, it has its own dedicated  AI element known as a neural processing unit (NPU), which it uses for automatic scene recognition when taking photos.

Talking about performance, the device managed to rake in 1921 points in the single-core test and 6729 points in the multi-core test, which appears to be similar to those of the Kirin 970 based Huawei Mate 10 pro. 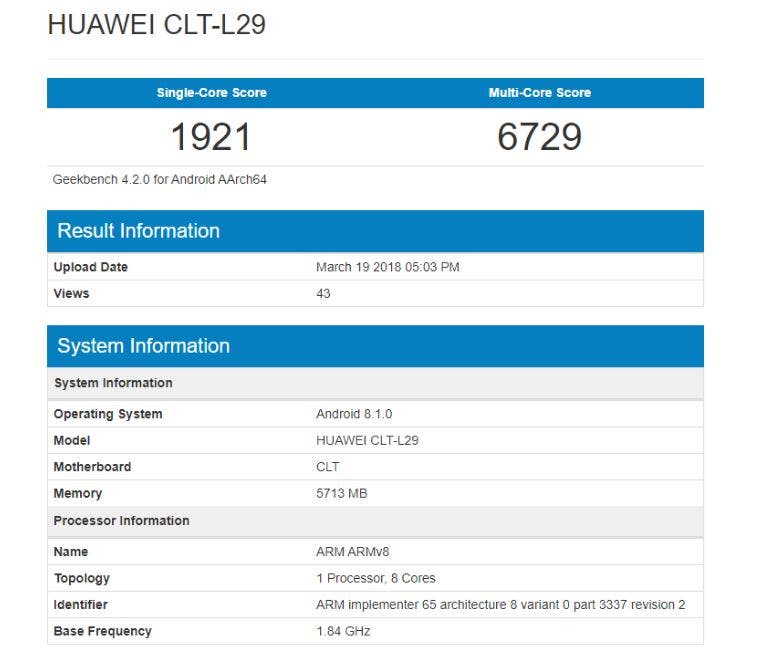 We reported earlier today, that the device triple rear camera would comprise of a 40MP main sensor, an 8MP telephoto sensor, and a 20MP sensor that’s believed to capture monochrome images and create depth effects. More details about the Huawei P20 triple rear camera, screen size and many more here.