The Xiaomi Redmi 5 Plus is the company’s first full-screen device categorized as a thousand-yuan machine. It’s been launched in multiple countries. That’s why the recognition level is too high. However, the company is not going to stop where it is now. Today, the Redmi 5+ was officially launched in Saudi Arabia.

The phone uses a traditional three-stage antenna design. Therefore, the middle part of the back panel is made of metal while the rest uses a plastic material. Like other newly-launched Redmi handsets this one comes with a symmetrical design – the camera, fingerprint scanner, micro USB port, and sensors are placed symmetrically. There are three color options to choose from – gold, blue, and black. 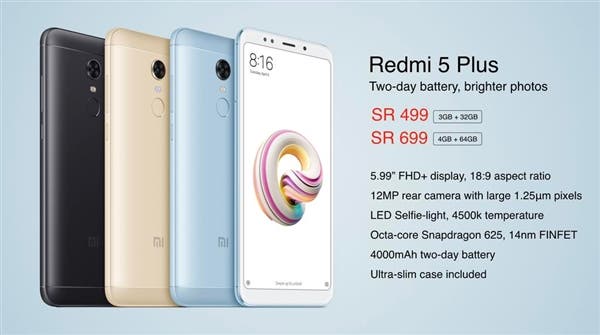 As for the configuration, the Xiaomi Redmi 5 Plus sports a 5.99-inch 2160×1080 pixels resolution screen with an aspect ratio of 18:9. It is packed with a Snapdragon 625 chip, which in its turn, is paired with a 4GB of RAM and 64GB of ROM. Although, there is a lower variant with a 3+32GB of memory combination. The battery capacity is 4000mAh, which is optimized with MIUI. Therefore, according to the official statement, it can provide up to 17 days of s standby time.

The device also sports a 12MP rear single camera with a pixel area of 1.25 microns. This camera supports PDAF phase focus and it is accompanied by a dual-color temperature flashlight. On the front, the phone carries a 5MP camera supporting smart beauty.