Oneplus 6 will be the 8th smartphone by the Chinese manufacturer. The OnePlus 5T debuted a few months ago and already reports about its successor are popping up. In the latest report, the price of the OnePlus 6 is listed as $749. 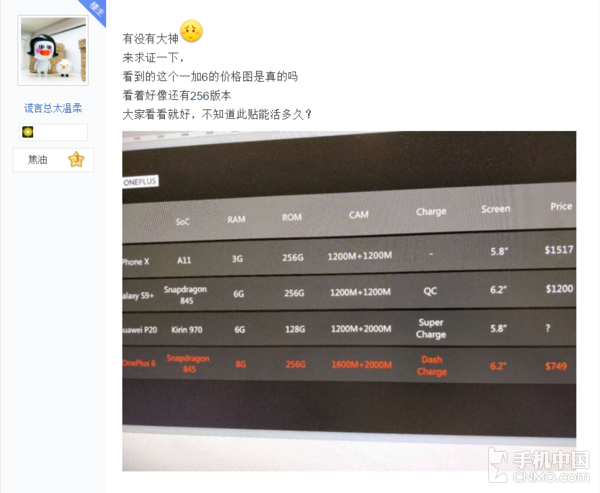 The image that has been reported seems to be from a presentation comparing various flagships including the iPhone X, Samsung Galaxy S9+, the unreleased Huawei P20 to the OnePlus 6.

Thecomparison also throws light upon the various other specs of the next OnePlus flagship. The Qualcomm Snapdragon 845 will be the heart of the phone coupled with 8GB of RAM and a whopping 256GB of on-board storage. A dual camera setup of 16MP and 20MP sensors will sit on the back whereas no details about the front camera are known. The display is pegged to be a 6.2-inch screen. And from earlier reports, it seems that it will have a notch allowing for a greater aspect ratio than 18:9. Dash Charge would come as a parcel with the phone. It will be priced at $749, making it the costliest OnePlus smartphone in history.

OnePlus has stayed true to its nature of making flagship killers. Will it be able to do so with the OnePlus 6 too? Let us know what you think in the comments below.