Aside from the unannounced Huawei P20 pro, the upcoming smartphone from Xiaomi – the Xiaomi Mi Mix 2S is one other phone that tech pundits are eagerly waiting for, and surprisingly, both devices are scheduled for same day unveiling – March 27th. Following yesterday’s teaser from the company itself,  fresh details in the form of a leaked image together with some few specs of the upcoming device have emerged today from China’s Weibo.

While yesterday’s image teasers from Xiaomi confirmed the presence of a slightly thick bottom bezels and expressly set aside previous speculations that suggested the Xiaomi Mi MIX 2S will be equipped with a notched display, the latest leaked image as seen below, however, seems to be a contradiction of the official promotional images.

The latest leaked image indicates that the bottom bezels will be as thin as the sides bezels, and shows no presence of a selfie camera, unless, of course, we are dealing with a low res or completely fake image.

As for the remaining details contained right below the leaked image, the Xiaomi Mi Mix 2S will come with what Xiaomi calls the Full Screen 3.0 design and will be fitted with a 5.99-inch Full HD+ resolution of 2160 x 1080 pixels and an aspect ratio of 18:9. The flagship Snapdragon 845 chipset from Qualcomm will be used in the upcoming Mi Mix 2S, and that will be coupled with 8 GB of RAM and it has an internal storage of 256 GB. 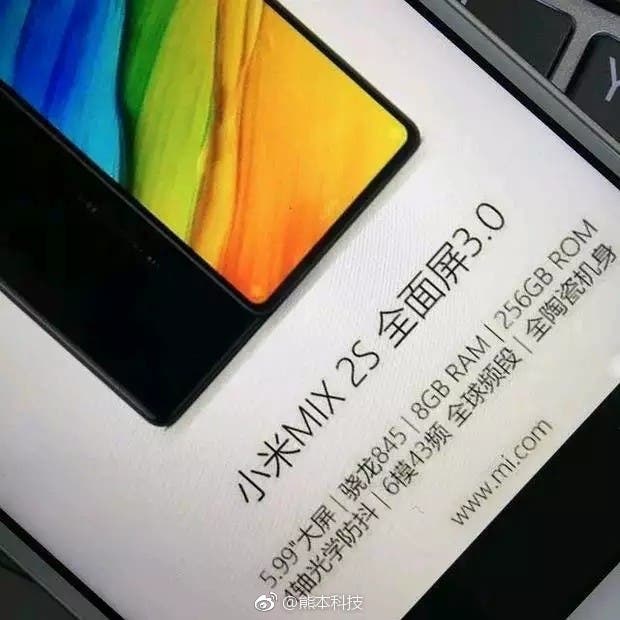 The images also indicate that the Mi Mix 2s will be made out of ceramic much like it did to the Mi Mix 2, so there is the likely hood of having the device in a non-ceramic variant with lesser RAM. In any case, the device will be announced soon, and then and then we can confirm every detail.