Today Samsung announced a new SoC for its 7-series named the Exynos 9610. It’s based on the second-gen Samsung’s 10-nanometer FinFET process node that enhances the multimedia experience a lot. As the manufacturer claims itself, the biggest improvement refers to the ISP. 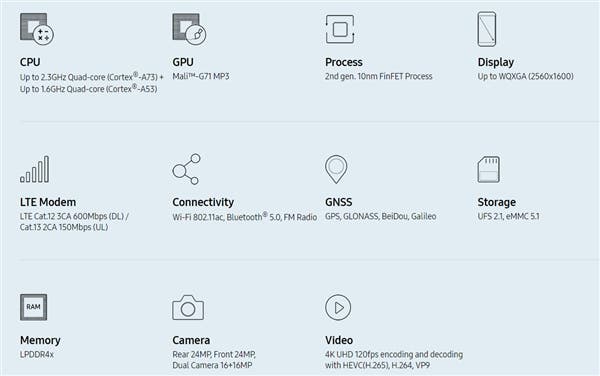 First, the Samsung Exynos 9610 chip uses an octa-core architecture integrating four Cortex A73 large cores clocked at 2.3GHz and four A53 small cores clocked at 1.6GHz. They are paired with a second-gen Bifrost-based Mali G72 MP3 GPU that brings more realistic and immersive graphics to the mobile devices. Thanks to these components, the 9610 offers smooth mobile computing and gaming performance to meet the needs of today’s high-end smartphones. As you guess, it is capable of launching apps quickly and run multiple tasks simultaneously. As for the radio modem, it comes with a Cat.12 that provides a download speed of 600Mbps. The rest of connectivity options include a Wi-Fi 802.11ac 2×2 MIMO, Bluetooth 5.0, and so on.

As said, the Exynos 9610 comes with tons of improvements in multimedia performance and shooting experience. The visual and image processing are combined with a neural network engine that enables smarter and enhanced face detection. This feature allows the camera to recognize faces that are not facing forward or are partially covered by objects such as hair and hats. With an intelligent depth sensing, the camera can be used to shoot defocused or focused portraits. Plus, the camera takes better photos in low-light condition.

The Exynos 9610 also supports a Full HD 480fps slow motion. Even with the traditional dual-stack image sensor, the Exynos 9610 can still encode slow-motion video at 1.6 times faster time in comparison to the Exynos 7885. The Exynos 9610 retains the same 4K 120fps video decoding as the flagship model, 9810. In addition, the processor also uses an advanced multi-format codec (MFC) to provide an encoding and decoding up to 4K 120fps.

It will go into a mass production in the second half of 2018.