Vivo has officially announced the Vivo V9 at an event in Beijing, revealing a selfie-centric smartphone with an iPhone X-style notch, and A.I. prowess, a word that is of late becoming a slogan among Chinese phone manufacturers.

The Vivo V9 features a 6.3-inch IPS LCD display with a 2.5D curved glass,  virtually no side bezels,  19:9 aspect ratio and a screen notch that houses the selfie camera which powers the AI Face Access feature that allows you to unlock the vivo V9 with your face instead of with the back-mounted fingerprint scanner. At the back, the vivo V9 houses dual cameras set up with flash arranged in a manner that mimics Apple’s flagship iPhone X.

The rear cameras comprise of a 16-megapixel primary sensor with an f/2 lens and a 5-megapixel secondary sensor capable of capturing in-depth information and blurry backgrounds.

The main highlight of the Vivo V9 is the 24-megapixel f/2 front-facing camera housed in the notched screen. The camera is laden with AI Face Access feature, an advanced form of Android Face Recognition feature that can tell whether or not you’re looking at the phone.

The Vivo V9 camera also comes with AI AI Face Beauty feature that relies on the machine learning to identify users’ age, skin tone, sex, and texture in order to “truly represent their beauty.”  Still, on the AI prowess of the Vivo V9, the latest selfie-centric smartphone from vivo comes with “AI Smart Engine”  that handles storage management and app launches based on the user’s behavior. 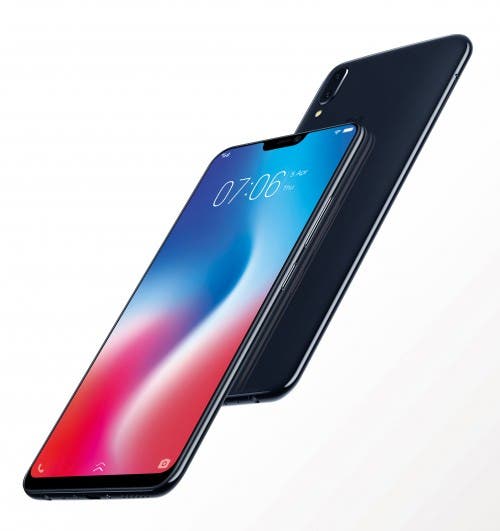 Other specs and features are presented below;

The V9 launches in India on March 23, and will be available in black and gold color options; We will bring you more info you on pricing and availability soonest.