OnePlus seems to be gearing up for the unveiling of the OnePlus 6, successor to the 5T. It isn’t hard to guess what the specs would be since OnePlus usually has the latest and best components on their devices. A spec sheet that leaked today reveals the same. 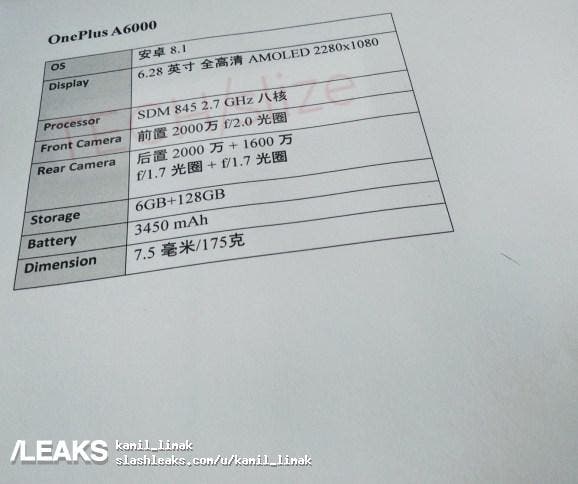 Listed as A6000, a common nomenclature used by OneplOnfor their phones, the specifications hint at a powerful device. The screen is a 6.28-inch AMOLED panel that has a resolution of 2280 x 1080 pixels. The Qualcomm Snapdragon 845 clocked at 2.8GHz runs the business around here. The variant specified has 6GB RAM and 128GB on-board storage. Notice that this time the 6GB variant has a larger on board memory, implying that the 8GB variant of, it exists, will probably have about 256GB or more storage. Last week, a presentation slide that leaked showed a OnePlus 6 variant with 8GB RAM and 512GB ROM. Powering the phone is a 3450mAh battery and Android Oreo 8.1. In the camera department, there’s a 20MP f/2.0 snapper on the front and a 20MP f/1.7+16MP f/1.7 combo on the back.

These are probably specs of the lower memory version of the OnePlus 6 and the 8GB version will probably differ only in memory. Watch this space for more!

Next VIVO V9 Lands in India: The Next Destination is Indonesia