Samsung’s Galaxy S9 duo is now available, following its March 16th Global release date, so that infers it is just about time we start seeing leaks, rumors and educated guesses about the upcoming phablet from the Korean giant. A few days back, a report emerged that the Galaxy Note 9 firmware is now under development, and now comes a report that the device has been spotted on the Geekbench database, revealing only a few things about the device.

As per the listing sighted on the Geekbench database, a device listed as SM-N960U which matches the Model number of the upcoming Galaxy Note 9 is seen with similar specs as the Galaxy S9+, featuring  Qualcomm Snapdragon 845, 6GB of RAM, but with a more recent Android 8.1 as the operating system.

On the performance level, the device alleged to be the Galaxy Note 9 is seen putting on a 2,190 single-core score and 8,806 multi-core that are both lower than those of the Galaxy S9+.

We reported earlier this month that Samsung has started testing two firmware versions of the phablet Galaxy Note 9, two weeks earlier than it did for the Galaxy Note 8, so we can safely assume we would get to see two variants: a Snapdragon and Exynos versions, and it could be announced much earlier than the 2017 flagship phablet. 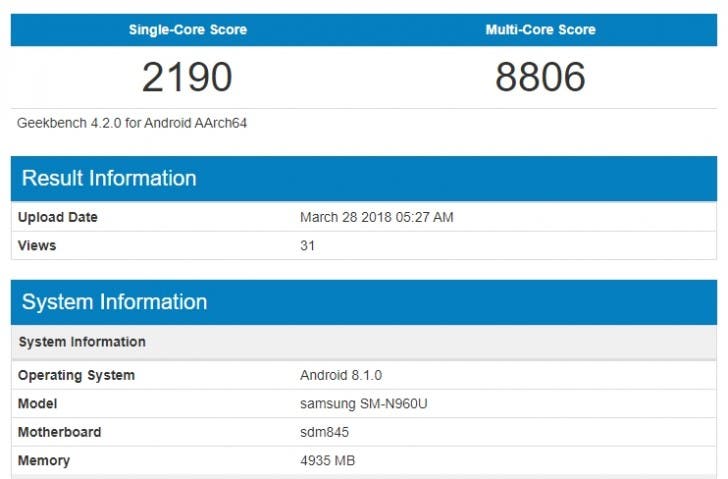 There are speculations, also, that Samsung may have concluded using a truly all-glass front that embeds an under-glass fingerprint scanner, sensors, and selfie camera.

Next Say Hi to this "Notched" Honor 10 prototype