We were told a few weeks back, that LG showcased the LG G7, the LG V35 alongside the LG Q7 at the MWC in Barcelona. And while we’ve had some back and forth reports on the status of the flagship LG G7,  fresh evidence has surfaced that suggests the LG Q7 mid-ranger is actually in the works as the company has trademarked the LG G7 moniker.

The application for the for the LG Q7 under the ‘mobile phone, smartphone categories was filed at the end of February to the KIPO (Korean Intellectual Property Office), and approval subsequently granted on March 9th, 2018.

No info/ details were given regarding the possible specs and features of the LG Q7, but it is safe to assume the Q7 will carry on and even improve on some features of its predecessor – the LG Q6. The LG Q6 was announced back in 2017 in variants including the Q6α  with 2GB of RAM and 16GB of storage, the Q6 with 3GB of RAM and 32GB of storage, and lastly the Q6+ which sports 4GB of RAM and 64GB storage. All variants have the military MIL-STD-810G standard specifications and are powered by the same Snapdragon 435 processor with a 5.5-inch 18:9 2160 x 1080 “FullVision” display. More details here. 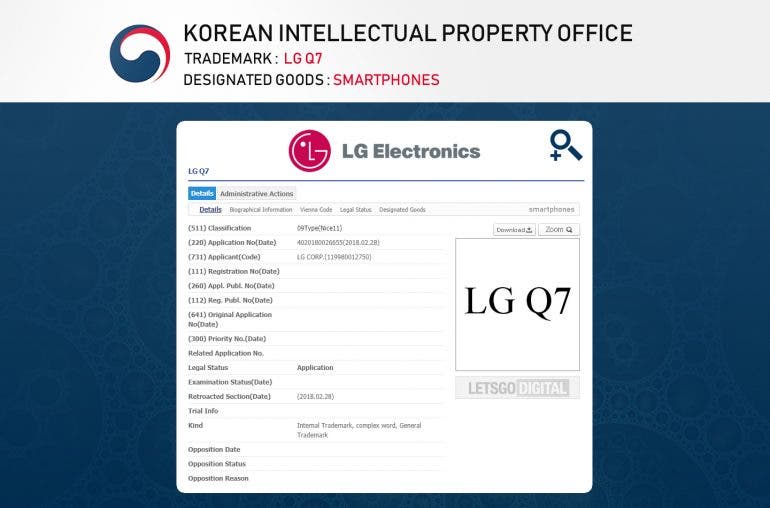 While trademark doesn’t at all times mean the device will eventually be released, the LG Q7 release is more likely given the fact that a device with the name was initially showcased by the maker at the MWC 2018.

Next Meizu E3 To Go On Sale Tomorrow On March 31