The Google Pixel 2 and Pixel 2 XL will be forever in Google’s memory, not because of the device’s performance in the market, but due to the number of issues that the device is suffering through its lifetime. There were burn-in issues with the screen after a few time of use, clicking sounds coming from the handset speaker, microphones that were suddenly stopping during a call and the inability to the receiver of download MMS messages on both handsets.

For the latter problem, Google claims that have found a fix and it’s delivering it to all owners around the globe. Even though, most of Pixel 2 and 2 XL owners are disagreeing with the big G. In the Google Forum for Pixel 2 XL, a Google employee named Pankaj Kanwar put up a post that said:

“Thanks everyone for reporting this issue. It should now be resolved. Please let us know if you continue to encounter the problem.” 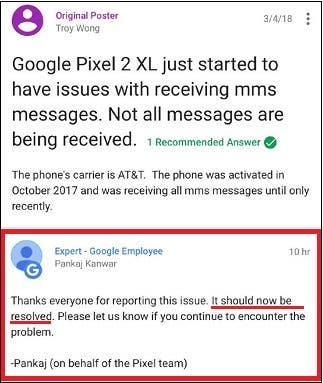 However, just a few hours after posting the above statement, Kanwar’s post was flooded by comments from users that are still experiencing the issue on their handsets. A few users can’t even send a message to their 2017 Google flagships. According to reports, this issue is affecting those who are costumers from AT&T or the latter prepaid Cricket service, which also uses AT&T network.

Thankfully, there is a workaround for those who still haven’t found grace in the fix offered by Google. According to some users, they managed to fix MMS by disabling the “Enhanced 4G LTE Mode” by going to Settings >> Network & Internet >> Mobile Network >> Advanced. However, we advert users to not stop complaining about Google and the carrier for a decent fix for the MMS issues, since disabling Enhanced 4G LTE Mode isn’t something that will be welcome for the most part.

Next Galaxy J8 and J8+ have its battery details leaked