With the Exynos 9810 powered Samsung Galaxy S9 now on sales, and the Phablet Galaxy Note 9 now under development, the latest report says the Korean giant is now working on its in-house Exynos platform that will likely power its next generation of Galaxy smartphones.

As per the information found in a list of projects on the LinkedIn profile of one of the Samsung engineers, Samsung next in-house flagship Exynos will be called the Exynos 9820 SoC, and going by Samsung’s ways of doing things, the  SoC will power 2019 flagship S10 and possibly the next  Galaxy phablet after the upcoming Note 9.

While there are currently no details on its internal makeups, the chip is expected to be built on the 7nm EUV process, and will most likely bring to come with several improvements including a more capable GPU with a clock speed of up to 3GHz, support for 5G connectivity, and should also improves on power efficiency. 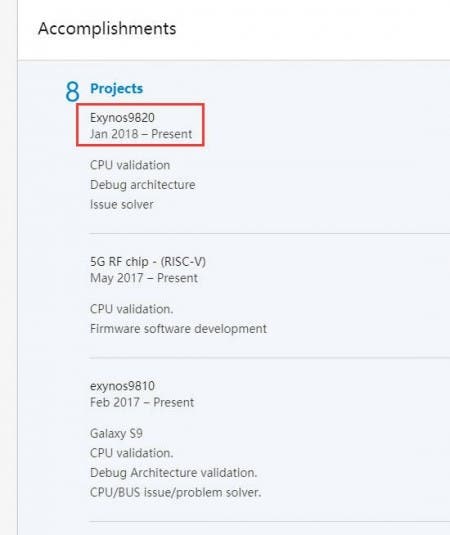 We would probably have to wait until the Note 9 is released before we can begin to get more useful information on what the Exynos 9820 SoC holds in terms of internal configurations.

Next Presale for the Vernee M6 is finally here with the $99.99 price