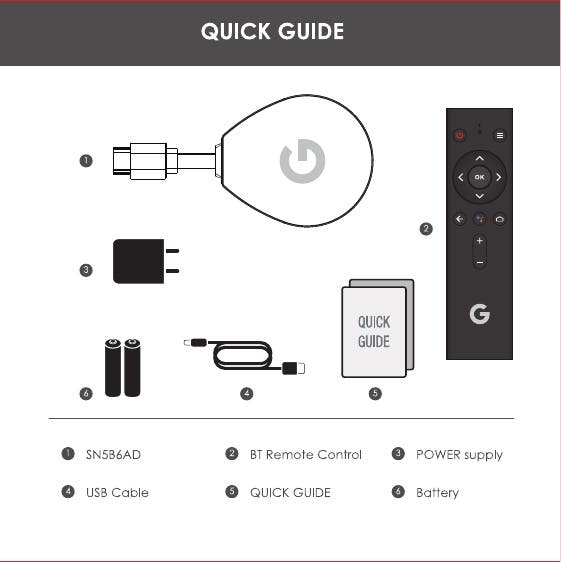 The device seems to have taken cues from the existing Chromecast, as it retains the circular-ish design with an HDMI wire attached to it. The Quick Guide shows a bundle consisting of the dongle with the model number SN586AD, Bluetooth remote with a dedicated Google Assistant button, charging cable, batteries and a charging adapter. Pretty much the usual set of artifacts you see as a part of a Android TV stick.

The dongle has a large “G” logo on top, similar to that of the Google Assistant. The spec sheet details the processor as Analogic S905X coupled with 2GB RAM and 8GB of onboard storage. The alleged Google Android TV Stick has support for hardware accelerated video decoding at 4K/60FPS from both H.265 and VP9 codec. The device is manufactured by “Shenzhen SEI Robotics Co. Ltd.” and is named “4K ATV Stick”. Folks at ArsTechnica tried validating this leak through Google PR and they replied by saying, “We don’t comment on rumors or speculation.”. Well, either this is an upcoming Google Android TV Stick or someone in China is up for a lawsuit against them.

Next Nubia Z18 Mini Launched with Snapdragon 660 and 6GB RAM