ZTE’s sub-brand Nubia has a new smartphone in the works. The device whose name remains unknown at the moment has been spotted on China’s TENAA and the GeekBench site. Bearing the NX617J model number, the device appears to have a sturdy design with a rear fingerprint sensor, dual rear cameras, and a large display with the trendy 18:9 aspect ratio.

According to details on TENAA, the Nubia NX617J  is expected to come with a 6-inch 18:9 screen of 2160x1080px resolution and will be powered by the Snapdragon 625 chipset. TENAA revealed that the device will be offered in 3GB, 4GB and 6GB of RAM  with 32GB or 128GB of expandable storage.

As far as the camera specs are concerned, the NX617J will come fitted with a 16MP+8MP dual combo, while a 16MP selfie snapper will sit above the display. Fueled by a 4,870mAh battery, the Nubia NX617J will boot Android 7.1.2 Nougat out of the box.

The same Nubia NX617J has also popped up on the Geekbench listing confirming the presence of an Octa-core chipset, the Android 7.1.2 Nougat and 4GB of RAM. A single-core score of 814 and a multi-core score of 3898 are seen in the listing. 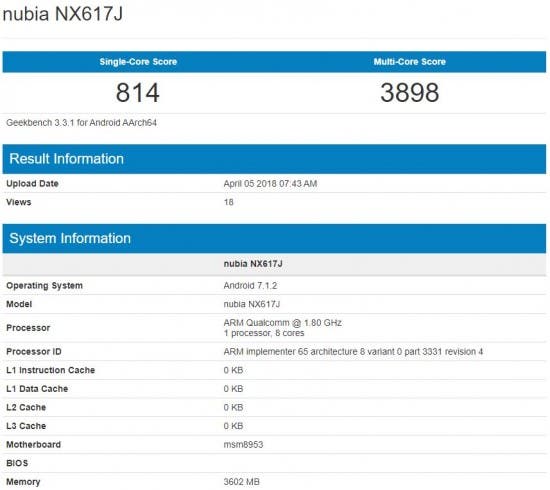 Nothing else is known about the handset, its appearance on TENAA and the Geekbench is an indication that the device might arrive soon.

Next [GizPoll of the Week] How Much Data Do You Consume Per Month?