Back at the MWC in February, Google and a couple of OEMs including Alcatel, ZTE, Nokia, Micromax, and Lava announced the arrival of the first set of Android Go smartphones. While some other OEMs have announced they will be announcing their first Android Go devices, Samsung and a few others have yet to confirm whether or not they will be releasing devices based on the light-weight Android Oreo (Go edition).

However, going by a report on Winfuture citing a Geekbench listing, a device with the model number SM-J260G has just surfaced on the benchmarking website Geekbench running Android Oreo (Go Edition). Though yet to be officially confirmed, well-known tipster Roland Quandt suggests the device will be marketed as the Galaxy J2 Core and could be the very first Android Go smartphone from Samsung.

Powered by a 1.43GHz quad-core processor coupled with 1GB of RAM, the alleged Galaxy J2 core according to the listing is based on Android 8.1 – which is probably the only major indicator that the device might be an Android Go smartphone.

On the performance level, the benchmark listing reveals that the device has scored 625 points in the single-core test and 1745 points in the multi-core test which falls within the ambit of entry-level devices. 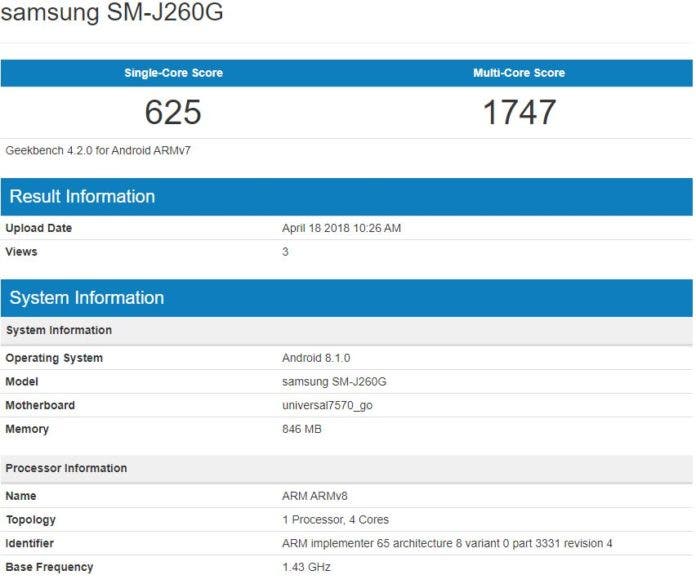 Outside of these details, the Geekbench database does not reveal any further information about the alleged Galaxy J2 Core, but we expect the rumor-mill to offer more insight on the device in the following days.

How to speed up your Android smartphone with these 8 tips