Is the Coolpad Cool 2 the coolest, or not cool at all?

Coolpad pops up once in a blue moon here on Gizchina, since they’ve never been all too relevant. Their products, while cool, are never actually better than the competition. The only reason Coolpad continues to get attention out of China in my opinion is their cool, meme-worthy name. Unfortunately, I feel like all of the above extend perfectly to their latest device, the Coolpad Cool 2. Yet another mid-range device with all the typical mid-range standards.

You’ve got the MTK6750 chipset in here with 4GB of RAM and 64GB of internal storage. There’s a 5.7-inch HD+ (1440 x 720) display, a dual 13MP+0.3MP rear camera, an 8MP front camera and a standard 3,200mAh battery. It runs on Android 7.1.2 Nougat, and it has the normal metal build with a microUSB slot. There’s really nothing standout about it, especially considering what others like Vernee are doing. Even prices haven’t been announced, so we don’t know if it’ll compete in terms of pricing.

I mean, at least there’s the novelty factor of having a phone literally called the Cool 2. That might be something interesting to toss around, might make you seem pretty cool. I mean, it’s probably going to be a perfectly fine device, but there’s just nothing special about it. But what do you think? Perhaps there’s something beautiful, alluring or, dare we say it, COOL, that you see in the device? Maybe there’s some sort of redeeming quality you think it has? Tell us your thoughts in the comments section below. 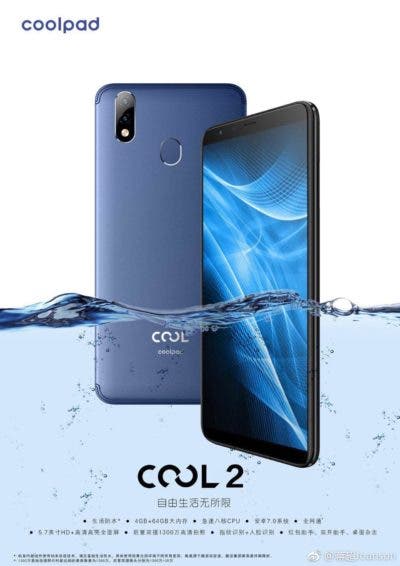 Previous Galaxy Note 9 gets CMIIT certification, might get released in Autumn