Not only Xiaomi’s smartphones became a source of inspiration for other manufacturers but its smartwatches as well. Though until today, the company hasn’t launched a single smartwatch that carries Xiaomi brand. As you know, its smartwatches are launched via its sub-brand of Huami. However, it didn’t interfere the company to sell myriads of those smartwatches. But the first-gen Huami Amazfit costs around $100, while the second-gen model is available at $200. This is cheaper than the Apple’s and Samsung’s representatives. But it’s a bit more than a regular user would like to pay. For all those cases we are offering to take a look at cheaper alternatives. As for the Xiaomi Huami Amazfit replica, we can recommend the Wlngwear M10. It looks like the mentioned model and does almost the same but costs $27.99. You can get your hands on it if using the coupon (code: Wlngwear). 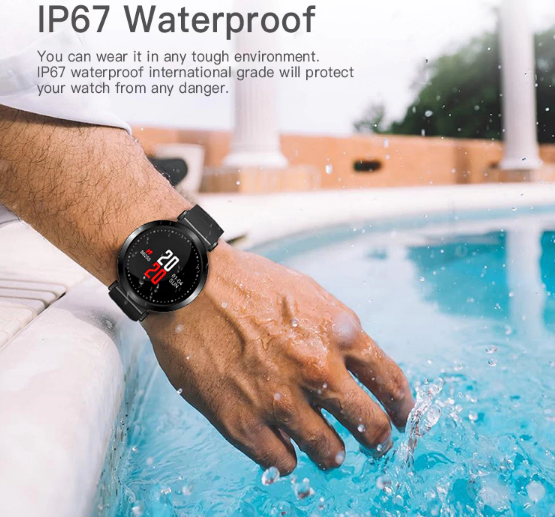 The Wlngwear M10 comes with the same design as the Xiaomi Huami Amazfit. The only difference concerns the chassis. It is rounded on the Xiaomi model, while the M10 has a burnished surface. But both are made of metal. This smartwatch also uses silicone straps at an 18mm width. There are various color options including the all black, black/gray, black/red, black/blue, and another black/gray option with a silver chassis.

Like its founding father, this smartwatch has no physical keys. This means the interaction with the product is done via touch commands only. Actually, the smartwatch sports all features such as Heart rate monitor, sleep monitor, pedometer, sedentary reminder, blood oxygen monitor, blood pressure monitor, etc. It also has three sports modes showing the burnt calories, steps, and passed distance. Plus, you can pair the Wlngwear M10 with your phone and get notifications about calls and messages.

As for hardware, it is packed with a Nordic 52832 built-in chip that works smoothly to display all the necessary information on a 0.96-inch color display. Plus, this model is packed with a 120mAh battery that will charge in 1.5 hours and provide 7 days of working time.