We are now at a point in which the official launch will add pretty much no details to what has already been leaked about the Samsung Galaxy A6 & A6+ thus far. The last piece of the puzzle was the pricing and now, according to the latest info bits, we have that as well; so, let’s recap everything we know! 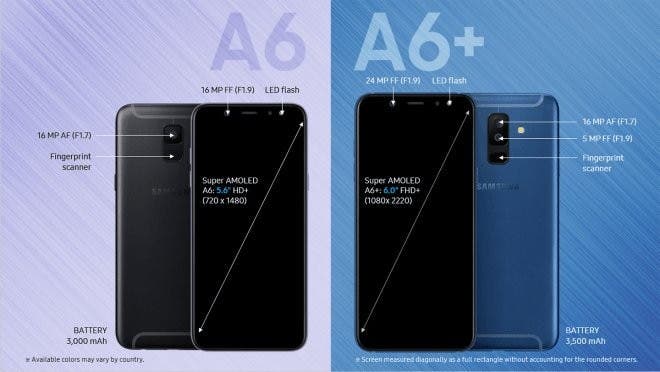 Let’s begin with the Samsung Galaxy A6, the more budget friendly of the two will come with a 5.6-inch SuperAMOLED display with an 18.5:9 aspect ratio and 1480 x 720 resolution. The phone will be powered by an Exynos 7870 along with 3GB of RAM and 32GB of internal storage (4/64GB in some countries) with microSD expansion to up to 256GB.

According to the latest leaks, the Samsung Galaxy A6 will be priced between €300 and €340, depending on the market.

As far as the Samsung Galaxy A6+ goes. The smartphone will be featuring a 6-inch SuperAMOLED display with the same 18.5:9 aspect ratio and a nice 2220 x 1080 resolution.

Samsung’s A6+ will be powered by a Qualcomm Snapdragon 450 paired with either 3GB or 4GB of RAM along with 32GB or 64GB of internal storage, both variants expandable to 400GB via microSD.

The most interesting piece of hardware on the A6+ is probable the dual camera setup. We indeed find a 16MP f/1.7 camera paired with a 5MP f/1.9 sensor on the back, meanwhile on the front we will have a really high res 24MP camera with an f/1.9 aperture and LED flash.

The Samsung Galaxy A6+ is expected to be priced between €360 and €400€, always according to the leaks.