Lately, Strategy Analytics published a report concerning the global smartphones shipments. According to the source, the overall smartphones shipments reached 345.3 million units in the first quarter of 2018. Thus, it decreased by 2.4% in comparison to the previous year. They think it’s related to the longer replacement period, a sharp reduction in operator subsidies, lack of innovations. 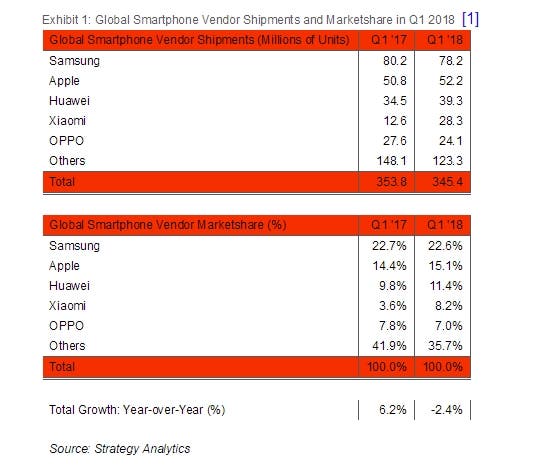 Though there were sold fewer smartphones globally, various manufacturers performed differently. However, Samsung continues leading with 78.2 million shipped units. But it decreased by 2.5% year-on-year, and its market share lost from 0.1% to 22.6%.

As usual, Apple ranked second with 52.2 million units. It’s an increase of 2.7% compared to the same period of last year. The market share of the Cupertino-based company reached 15.1%.

Not surprisingly, the Chinese tech giant, Huawei is the third. Its quarterly shipments reach ed 39.3 million, an increase of 13.9% year-on-year. Thanks to myriads of innovative models, the company could occupy 11.4% of the market, a 1.6% increase in comparison to the Q1 2017.

Xiaomi continues surprising us. Last year, Xiaomi performed quite eye-catching. But what it did in the Q1 2018 is out of mind. This manufacturer shipped 28.3 million units, while it sold 15.6 million units in the Q1 2017. Thus, the Chinese Apple shipped twice more. So not accidentally, it jumped to the fourth place in the world. If everything goes at this pace, the company will surpass the goal of 100 million units.

At last, OPPO was pushed to the fifth place with 21.1 million shipped smartphones. It’s a decrease of 12.7%. This company takes 7% of the entire market.

Next DROCON Scouter Foldable and Pocketable Drone on Sale at Amazon