Having released the Android 8.0 Oreo update for the US Project Fi model of the Moto X4 in December, the Lenovo-owned company decided that now is the perfect time to release the incremental 8.1 Oreo update to the mid-range smartphone.

This update isn’t a regular one made by the company, but a combined work with no other than Google, since both companies teamed up to offer the latest Android release to those who own the Moto X4 with Google’s Project Fi label embedded on it. Worth noting that this update comes a little later than most of us have expected. 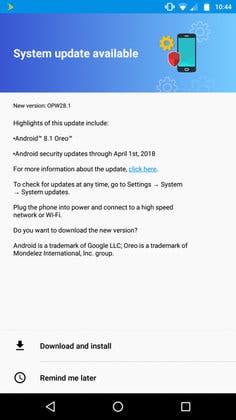 Like previously mentioned in other posts about the Android 8.1 release, it doesn’t bring major overhauls or groundbreaking features when compared to its predecessor. Instead, the new version keeps a simple approach, by fixing all the issues that made Android 8.0 a so problematic release for OEMs, also it brings a new dark theme and a power menu, as well as some under-hood tweaks made to improve the phone smoothness.

We can’t stipulate how big this update will be, but of course isn’t close to what Android 8.0 was to phones running the previous version. Like most of OTA updates, this one goes in an incremental form, so it should take some days to arrive for all Moto X4 Project Fi models, the standard Moto X4 isn’t included in this update batch, but we don’t think that Motorola will delay this update for much more time.