The Nokia X, also known as Nokia X6 has appeared in a poster that was posted on Nokia’s and Suning’s Weibo accounts. Suning.com has organized a competition where they are giving away money and 10 units of the Nokia X. 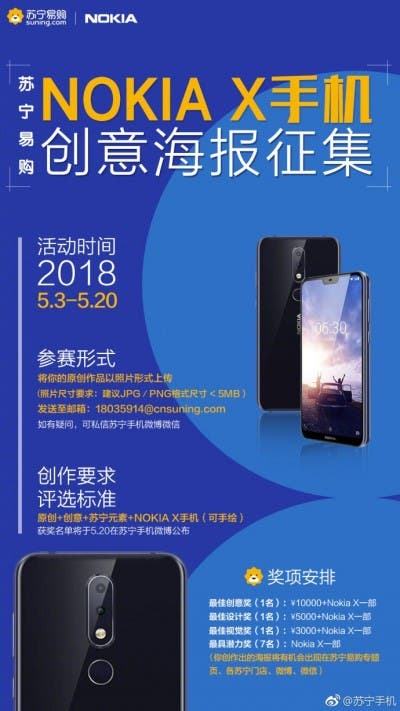 Nokia took to the stage last week in China to do a 6-day event, showcasing the history of the Nokia phones. This was a build up to the event that is coming up on the 16th of May when the X will be unveiled. The poster that was put up by Sunning.com details the Nokia X in all its glory. The body is an amalgam of metal and glass, which is quite a premium offering. The full screen display up front will have a notch on top. The glass back on the other hand will feature the dual camera setup and the fingerprint scanner.

The phone looks stunning, even when compared to the Nokia 7 Plus and the Nokia 8. It is expected to be powered by the Qualcomm Snapdragon 636 chipset coupled with 4GB of RAM. The Nokia X has a fairly smaller frame as compared to the Nokia 7 Plus making one-handed usage friendly. The X will launch a day before the OnePlus 6. Will it be able to steal the OnePlus 6’s thunder? Only time will tell.

Previous Report: HiSilicon Kirin 980 to be built by TSMC on the 7nm processs